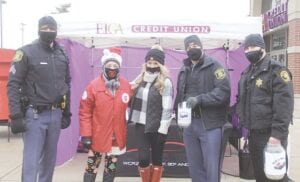 Volunteers gathered at the Elga Credit Union, 2303 S. Center Rd., on Dec. 4 for the Stuff a Blue Goose event. Photos by Gary Gould

BURTON — The 8th Annual Stuff a Blue Goose toy drive was held Dec. 4 at the Elga Credit Union, 2303 S. Center Rd., and despite a tough year for everyone, people were still out in force making donations.

Stuff a Blue Goose is a cooperative effort between the Michigan State Police, Elga Credit Union and local police and fire personnel to collect toys for Genesee County children in need.

Michigan State Police Trooper Steve Kramer with the MSP in Flint said Stuff a Blue Goose is partnering with the Salvation Army to fill their toy shop this year. At the drop-off event Dec. 4 police and fire fighters, along with Cars108, were on hand to collect toys and monetary donations. He said they then help dispense toys to the needy families, so the kids can have a Christmas.

“This is something we’ve been doing every year,” said Kramer. “This year more than ever it’s something that is needed and that’s why we decided to push forward, while trying to practice social distancing.” 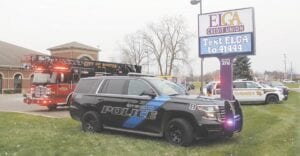 Police and firefighters were out in force to promote the annual charity event.

Kramer said there hasn’t been a lack of Christmas-giving this year, though he noted the collection saw a little less traffic this year, possibly due to not as many people being out and about Christmas shopping.

He said all of the toy and donation collection was contactless, with donors pulling up at the Elga on Center Road and MSP or other first responders opening the car door take to take the packages out. Financial offerings were made through collection buckets.

“There is no personal contact. We’re still respecting the social distancing and practicing the safety measures, but it’s something we still wanted to do this year because its more important now than ever,” said Kramer. “It’s not the kids’ fault mom and dad got laid off and we want to make sure those kids don’t suffer.”

Besides MSP and Elga, the Genesee County Sheriff’s Department, Burton Police Department and the Burton Fire Department were all involved in this year’s event.