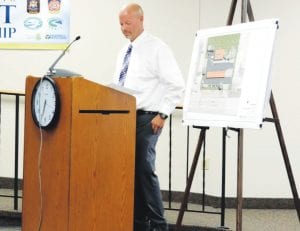 Eric Carter, an engineer for Weihe Engineers of Indianapolis, presented plans to the township Planning Commission to rebuild the Speedway station at Bristol Road and Holiday Drive.

FLINT TWP. — Facelifts for Speedway gas stations in the township will continue next year.

Plans for a rebuild of the Speedway at 2169 Bristol Road and Holiday Drive were approved by the township Planning Commission on July 9.

Same as work in progress at the station at Linden and Corunna roads, the Bristol Road project will involve a complete teardown and rebuild of a prototype facility with a convenience store and uniform pumping area.

Plans include a further setback and relocation of driveways that will improve traffic flow in the area near the General Motors plant, said Tracey Tucker, building director, adding that the Genesee County Road Commission is very pleased about that.

Eric Carter, an engineer representing the Enon, Ohio based company, said it will be the exact same build as the one under construction at Linden and Corunna roads.

“Overall this rebuild will be an improvement to the site,’’ he said.

The prototype convenience store will be 3,936 square-feet fronted by seven pumping stations under one canopy.

Carter said that construction should begin by early spring.

Meanwhile, after about three months of construction, the new Speedway at 1499 S. Linden Road is expected to reopen on Sept. 2.