Answer to his prayers 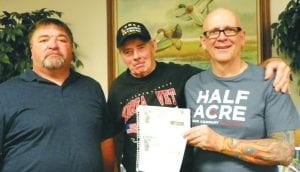 As an old man, Feltner, now 79, recently found himself embroiled in a domestic battle that cost him his home and much more.

Feltner was only two days away from eviction from his Grand Blanc Township home of nearly 12 years when he was rescued last fall by a couple of Good Samaritans. They found him living in a home without a furnace, burning fence posts for firewood to keep warm and sleeping on the floor because he did not have a bed.

“This was a total elder abuse case,’’ said Fred Andre, a Vietnam Veteran, and one of Good Samaritans who is helping Feltner get back on track.

“I have pictures of what he slept on on the floor,’’ Andre said.

Since getting involved Andre has escorted Feltner to court to get a twoweek extension from his eviction date, helped him find someplace to live where he could keep his two dogs, handles his banking, helped him file tax returns and generally runs errands. 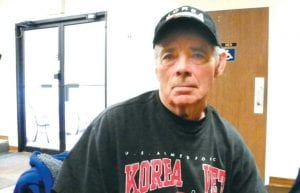 Korean War veteran Fred Feltner received help from concerned individuals to keep from being evicted from his home, recently.

Feltner, a 28-years General Motors retiree, fell on hard times after allowing relatives to take over his finances after his wife became ill. After she died, the arrangement continued but Feltner’s bills were not getting paid and his worldly possessions were being stolen by relatives, he said.

“Instead of helping me, they were ransacking my property,’’ Feltner said. “They started carting out all my valuables, my heirlooms.’’

Feltner said he begged them to stop to no avail.

“I got so angry, I could not handle it no more,” Feltner said. “ I started praying. I said Lord, this is in your hands. I can’t handle it any more.”

An hour later, Feltner was holding a yard sale trying to raise some cash when Bob Wilson, the first Good Samaritan, stopped by. Feltner said the Lord told him to share his troubles with Wilson, a total stranger.

“I did not have no place to go or nothing,” Feltner said. “I was going to be homeless. He (Wilson) said ain’t nobody gonna run over no veteran.”

Wilson called the police to rout the abusive relatives then recruited Andre to help Feltner find a place to stay.

Wilson also called in the help of his neighbor, Byron Crumley a tax preparer at Tadrick’s Tax Service on Bristol Road. Crumley did not feel comfortable about handling Feltner’s account at home so he took it to his boss.

“We do very few tax returns for free,’’ said Bill Tadrick who added that his father also served in the Korean War and is about the same age as Feltner.

“We can’t afford to do all vets tax returns for nothing but when you find out about … the way he had been mistreated … his story was pretty compelling.”

Feltner’s sizable 2011 and 2012 tax returns, coupled with his retirement checks are building a nice savings account he plans to use for medical attention for his cataracts, hearing and teeth, said Andre, who takes no money for his assistance and keeps a strict account of Feltner’s finances which are regularly audited by the bank branch manager who also helped to get Feltner’s finances back on track.

By all accounts, Feltner, who will turn 80 in August, is settled and doing well. He prefers no to speak publicly abut some of the more disturbing details of his past troubles. He would not press charges because that is the kind of person he is, Andre said.

Feltner calls Andre and Wilson his new best friends but he also credits a higher power.

“My slogan now is I got my right foot in the right door,’’ Feltner said. “If God is not in it, it won’t get done.”