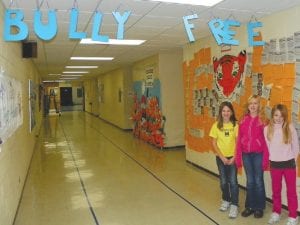 FLINT TWP. — During a cyber-safety talk with secondgraders at Carman-Ainsworth’s Woodland Elementary School, Lori Mabee asked how many of them had cell phones and most of about 30 children raised their hands.

It was a stark illustration of how technology has made children accessible to broader avenues of danger.

Mabee is a presenter for the Michigan Cyber Safety Initiative (CSI) from the office of state Attorney General Bill Schuette. She visited Woodland last week to talk to students about internet safety and cyberbullying.

To help them remember three keys of internet safety, Mabee introduced the students to hand gestures and showed cartoons to reinforce concepts such as “You’re not Alone’’ when it comes to dealing with cyberbullies.

Like cell phones, the internet can connect people all over the world, Mabee told the kids.

“I like to think of the internet as a big city that has safe places and unsafe places,’’ she said.

She talked to the children about identifying trusted adults and prompted them to list examples like parents, grandparents, teachers and police officers.

“I keep safe,” “ I keep away” and “I keep telling” were three cybersafety keys Mabee asked the children to remember when dealing with unsafe places and people online. That included telling a trusted adult when they encounter something that makes them feel uncomfortable or unsafe.

Other words of caution included not revealing their real names online with anyone they don’t know, not sharing their plans online such as dates and times of afterschool activities, and not responding to strangers in chat rooms while playing online video games.

Mabee encouraged them to use safe adult-supervised online gaming sites such as Club Penguin, Webkinz and Nick Jr.

Mabee said her presentation was one of five that CSI presents to children, according to grade level. Her appearance was part of Woodland’s yearlong anti-bullying focus aimed at teaching kids how to deal civilly with each other, said Laura Hall, Woodland’s peer mediator coordinator.

Woodland has trained 18 fourth- and fifth-graders to act as peer mediators for conflict resolution on the school’s playground and in general.

Visual reminders throughout the school include a” Bully Free” banner strung across the main hallway and bulletin boards featuring anti-bullying pledges and hand prints stating “My hands are for helping, my hands are not for hitting or hurting,” created by all 280 children who attend the school.

Hall said the board resulted from anti-bullying materials provided by the Detroit Tigers “Go to Bat for Fair Play” which kickstarted Woodland’s program in October. Woodland has had peer mediators in the past but this is the first year they have focused on anti-bullying because it is becoming a bigger° problem, Hall said.

Parents coming to conferences are being told about the effort and what to do if their child is a bully or being bullied.

“We want the kids to feel like this is a safe environment and there are trusted adults here,’’ Hall said.

There is a movement in Michigan for legislators to pass anti-bullying laws. Michigan is one of a handful of states that does not have a law on the books. Critics say a bill passed last week by the state Senate is not comprehensive enough.