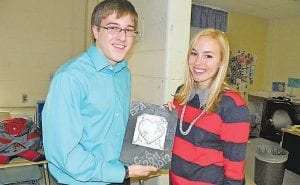 Andrew Ford and Jessica Eller, co-presidents of CA’s Empathy for All antibullying group show design for T-shirts group has orderd.

One example was a joint meeting Thursday between Empathy for All (EFA), an anti-bullying group formed last year at Carman- Ainsworth High School and the Power of 100, a similar group started two years ago at Swartz Creek High School.

Students met at CAHS to share ideas and talk about why it is important to take a stand against bullying.

Power of 100 students will accompany the “Bullycide’’ cast to Davison High School later this month to participate in an antibullying discussion following the presentation, said Kaylee Brown, president of Power of 100. CA students invited to join them will make it an interaction between at least four school districts.

Andrew Ford and Jessica Eller, EFA co-presidents, led a discussion in which some students gave tearful testimony about their reasons for getting involved in their respective groups.

For Eller, it was reading a news report about a gay student at Rutgers University in New Jersey, who committed suicide after his roommate allegedly outed him in a videotape broadcast online.

Three students said they joined the antibullying group because of a sibling with a disability who had been picked on.

“I have felt since I was small the need stand up for people who can’t speak for themselves,’’ one CA student said.

Other students said they had been bullies or victims of bullies.

One student said he and friends in middle school teased each other all the time but he did not realize until he started high school that it was a form of bullying.

Power of 100 started after a very upsetting hallway incident, said David Simancek, SCHS assistant principal and Power of 100 advisor. After reviewing the incident on a security camera, Simancek knew something had to be done.

“I saw the bully leave laughing from the scene,’’ Simancek said, adding that he also saw other students helping the victim.

Now 350 of 1,200 SCHS students have attended at least one Power of 100 meeting which means that one in every four students in the hallways have been exposed to the anitbullying message, Simancek said. T-shirts that members wear are another highly visible means of spreading the message, he said.

Often the younger children feel more comfortable sharing a bullying incident with an older student than they do with a parent or teacher, Mattern said.

A national study in 2010 found that 56 percent of students have witnessed bullying at school and 71 percent say it is an ongoing problem.

About 15 percent reportedly don’t come to school for fear of being bullied and one in 10 drop out because of it.