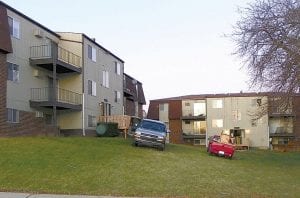 Trucks being loaded late Wednesday by people moving out of Brookstone Valley Apartments, which is being condemned after a water shut-off due to nonpayment by the landlord.

FLINT TWP. — “No water. No heat,” is how Vonroyce Johnson summed up living conditions last week in his apartment at Brookstone Valley Apartments, 5107 Drummond Square, off Flushing Road.

It was almost sundown on the day before Thanksgiving and Johnson was loading a car to move out of his home of 12 years. He was among about 25 families abruptly uprooted after Flint Township officials notified them that the apartment complex would be condemned following a water shut-off on Nov. 22 because the landlord had not paid the bill.

Owners of the complex — 3456 Flushing Road Holdings based in Pennsylvania — has a $65,000 out- standing water bill and needed to pay $55,000 to avoid shut off, said Tracey Tucker, economic enhancement director and township deputy clerk.

Unable to reach management for the complex since early November, the township posted the buildings on Nov. 16 notifying residents that they had about a week to find somewhere else to live before the water was shut off.

As of Monday, Nov. 21, Tucker said she did not know how many residents remained in the buildings but planned to visit the complex on Tuesday to distribute phone numbers from landlords who contacted the township to say they have available units.

Tucker said the Department of Human Services also had been notified about the situation to seek assistance helping tenants relocate.

“It’s an inconvenience,’’ Johnson grumbled, as he oversaw helpers piling his belongings into a car to move to Sunridge Apartments next door.

Walking with the assistance of a cane, Johnson said water in his building was shut off at 4 p.m. on Tuesday, more than 24 hours before he moved out. He said he had used heat from his oven to keep warm over night because the apartment also lacked heat.

Tucker said Johnson was not supposed to be still living in the building after the water was shut off.

Like Johnson, other tenants were at the complex on Thanksgiving eve loading belongings onto trucks but it is not known if they also spent the night there.

Tucker said this week that water has not yet been shut off at two buildings at the complex but that no one should be occupying those without water or heat. She said the township will condemn the entire complex after being notified by the County Drain Commission that water has been shut off in all buildings. Buildings already condemned are posted with large red signs, she said.

Tenants have a right to be upset if they were paying their rent and expecting the owner to pay the bills, she said. The short condemnation notice is warranted when health and safety issues are involved, she said. When buildings lack heat, people use space heaters and other means to keep warm which could start a fire and put other lives at risk, she said.

“I am hoping they (tenants) end up with something good,” Tucker said. “I know some are in desperate situations who can’t afford to move.’’

She said she was hoping prospective landlords would give them a break on security deposits to help with the fast transition.

Problems escalated at Brookstone on Nov. 7 after a township building inspector found three buildings without heat, Tucker said. Management was given two days to remedy the situation or relocate the tenants. Neither was done so those three buildings were condemned along with a fourth one that had raw sewage in the hallway from an earlier sewer line break that had not been cleaned up, Tucker said.

Current owners bought the property in receivership in 2009, Tucker said. Formerly called Drummond Square, when built in the late 1960s it was mostly occupied by medical professionals, Tucker said.

The township plans to pursue the owners for monies owed, she said.