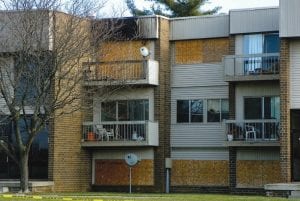 The exterior of an apartment building that burned Dec. 16 off Court Street.

FLINT TWP. — A pot left unattended on a stove was the cause of a fire early Sunday morning at Clover Tree Apartments off Court Street in which there were no injuries but 16 families were displaced from their homes, according to township Fire Chief John Ringwelski in a report Monday night to the township board.

The call about a large fire at the complex came in at about 1:13 a.m. Sunday and brought out a full response from the township fire squad with mutual aid from neighboring departments, he said.

Firefighters learned enroute that five residents were stranded on balconies because of the heavy smoke and intense heat from the fire. Upon arrival, fire crews immediately rescued four adults and one infant before turning attention to attacking the fire.

It was an unusual fire because of the construction of the building, Ringwelski said.

The compartmentalized structure was built with stacked modules that create a void in the walls, floor and ceiling, he said.

“We had fire going into the walls,” he said. “The fire traveled from the source apartment up through the floor of the apartment above then up to the roof and across to the adjoining apartment.

Paramedic and police officers assisted firefighters in hand dragging a hose 500 feet from the closest hydrant.

“That assisted us immensely in keeping the water flow going,” Ringwelski said. “We never lost water to this attack which helped to slow down and eventually cut it off.”

Three units in the 24-unit building took the brunt of fire damage with minor smoke and water damage to three others.. But 16 units were occupied and all residents were displaced because the building’s shared gas and water supply lines were shut off for safety purposes, leaving the undamaged units without heat or water, Ringwelski said.

The Red Cross was on the scene to help displaced residents find accommodations and the Salvation Army canteen also came in to provide food and water support to the firefighters.

Ringwelski stressed the lack of injuries in the rarely encountered type of fire that involved heavy smoke and intense heat and maneuvering with zero visibility around a table-sized hole in the floor.

“We had guys go through five or six bottles of air down there which is the equivalent of 20 to 30 minutes of firefighting,” he said, adding that they went through two air trucks of supply air.

“We don’t often have a fire like this but our guys did a tremendous job they fought the fire hard,” he said. “That is why we train for these iinstances that happen very seldom but when they do our guys are prepared.”

He also stressed the six-minute response time that could easily have been doubled if the township only had an on-call staff.

“Fire doubles in size every one to two minutes,” he said.. “There is no doubt we would have had a much greater threat to our residents in those buildings as well as a much greater property loss (without fulltime firefighters on staff).

Nine on-call firefighters responded to the fire, he said, singling out a few of them in the audience at the board meeting who were applauded for an outstanding effort.

Five City of Flint firefighters came in with their aerial truck and were instrumental in extinguishing the blaze on the roof and third floor, Ringwelski said.

“We were there for six hours during the main part of this attack,” Ringwelski said. “Our guys, they took a beating, but they kept going; they were there the whole time.”

Tracey Tucker added that township building inspectors had visited the damaged structure on Monday and permits processed to restore water, electric and gas service to the undamaged units with a goal of allowing those residents to return home by Christmas.