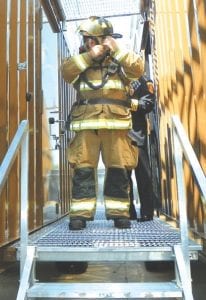 Firefighters demonstrate the use of the new training simulator.

The Flint Township Fire Department hosted an Appreciation Day for those who helped buy a new mobile fire training unit (SCBA) jointly funded by a federal grant. The equipment will be used in training firefighters in Genesee and Oakland counties.

Thanks to the generous business donors and contributions by local fire departments, all but about $2,100 has been raised toward $36,000 in matching local funds needed, said Flint Township Fire Chief John Ringwelski, adding that the remaining funds are expected to come in soon.

“Anybody who pays taxes has helped make this possible through the FEMA grant,” he said.

Chris Hennessy, a representative from Senator Debbie Stabenow’s office, stressed how hard it is to get one of the FEMA Assistance to Firefighters grants. 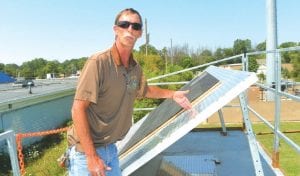 Bob Johnson, deputy chief of the Burton Fire Department, shows apparatus where firefighers practice chopping through a roof. It can be raised to any pitch or lay flat.

“It says a lot that Flint Township was able to get the grant but also to pull together all of the additional funding to help make this happen,” he said, with a nod to a list of corporate donors whose names were displayed on a sign attached to the training unit.

He also was one of several speakers heaping praise on assistant Flint Twp. Fire Chief Mike Burkley for successfully writing and administrating the highly sought after FEMA grant.

Having this equipment has been on a wish list for a long time, said Skip Davis, president of the Genesee County Fire Chief’s Association.

“I am excited and grateful that Genesee County has finally acquired a modular training device,” he said. “The unit allows our students to observe actual fire behavior and conduct numerous kinds of hands-on training.”

The trainer consists of two trailers that can be used together or separately. The “live burn” side will be used to conduct training in a realistic teaching environment, Davis said.

“Students will learn to fight fires in the same smoke and heat conditions that they will encounter on actual fire scenes,” he said.

Prior to obtaining these units, most of what new firefighters learned was taught in a less than ideal classroom setting. The trainers will provide a safe, controlled environment to practice what they learn in class, he said.

He also noted that acquiring the trainers was a countywide endeavor but could not have happened without cooperation from the Flint Township Board of Trustees. The Fire Chef’s association could not sponsor the federal grant request. It had to come from a government unit, he said.

Davis also commended various businesses being recognized including providing materials such as wood pallets and straw used in the live burns and transportation service to move the trailers to fire departments around the county.