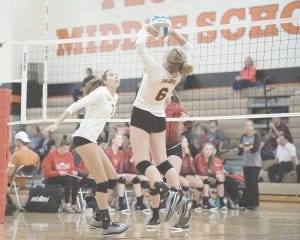 FLINT – As the summer winds down, the start of the fall sports season marks a transition period for many area-wide student athletes, as former high school standouts look to continue their athletic careers on the collegiate level. Each year, Mott Community College fields highly competitive teams that are littered with some of the top talent in both Lapeer and Genesee County. Below is a look ahead to Bears’ fall sports seasons, highlighted by some familiar faces.

The men’s cross country team boasts of trio of runners from Flushing with Kaz Goldyn, Nolan Herr and Jared Lindstrom. Goldyn and Herr are both entering their freshman seasons, while Lindstrom is a rising sophomore. At Flushing High last season, Goldyn and Herr led the Raiders to a fourth-place finish at regionals, narrowly missing the state finals by one slot.

Carson Humphrey of Grand Blanc and Mark Wood of Goodrich are also incoming freshmen running for Mott this season. Humphrey was a cross country and wrestling standout for the Bobcats. Wood was the Martians’ fastest runner a year ago, placing fifth at regionals individually at 17:07.12 and leading Goodrich to a second-place finish and a state finals appearance.

The Lady Bears feature Kristin Jaster, a Swartz Creek native who graduated from Flushing High this past June. Jaster ran track for the Lady Raiders this past season, qualifying for the state finals in the 1,600 relay at 1:46.09. The Flushing girls placed fourth as a team at the regional, one spot removed from state championship qualification.

The Mott golf team includes Austin Belcher of Grand Blanc and Noah Rocheleau. The pair of rising sophomores helped lead the Bears to a first-place finish at the Kirtland CC Invitational last season. The golf team carries tradition of continued success, winning the MCCAA State Championship in 2016 and the NJCAA Region XII Championship in 2017.

New additions to Mott’s volleyball squad include Quincy Davis, Taylor Wendling and Alexxis Keahey-Haney. Davis and Wendling are a middle back duo that graduated from Flushing in June, leading the Lady Raiders to a Div. 1 Regional Championship in 2018. Davis posted 10 kills and three blocks in the championship match, while Wendling added seven kills and four blocks. Flushing eventually ended its season in the quarterfinals, losing to Lake Orion in three sets.

Keahey-Haney is an outside hitter and an incoming freshman from Grand Blanc High. She heavily contributed to the Lady Bobcats district championship victory over Fenton in 2018.

Mott’s volleyball roster also features a pair of Swartz Creek natives and rising sophomores in Katie Speaks and Erika Lancaster. Speaks graduated from Carman-Ainsworth, and Lancaster was homeschooled. Speaks was a libero for the Lady Cavaliers and is now a defensive specialist for Mott. She was invited to the Bruin All-Star Classic volleyball game following her senior season in 2018 and also named All-Saginaw Valley Second Team as a tennis player.