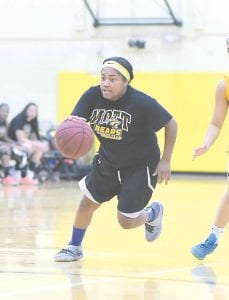 FLINT – The 25th annual Bruin Club All-Star Classic put on by Mott Community College was held this week, with many area athletes competing in All-Star games of volleyball, baseball, softball and basketball.

The week kicked off with the All- Star volleyball game on Tuesday at Mott’s Ballenger Field House, where the Gold team won in four sets, 20-25, 25-21, 25-23, 25-18. Outside hitter from Goodrich, Abby Francis, was named as the Black team’s MVP after recording 12 kills with six digs. Swartz Creek’s Rachael Skinner, also an outside hitter, took home the MVP honors for the Gold team. Skinner had 10 kills and four digs.

Wednesday saw a few actionpacked games of softball and baseball held at Whaley Park in Flint. Ultimately, the Gold team ran away with a 10-0 victory over the Black squad in softball, but the game was much closer than the final score would indicate.

“The game was 1-0 for the longest time and then the Gold broke the game open and the Black just collapsed,” said Mott softball coach Rod Studaker. “A remarkable note, though, was that we invited 39 players who were nominated by their high school coaches and 38 attended and played. That’s a first-ever for us as we usually have four or five who don’t show up or who can’t play for a variety of reasons.”

For the winning Gold team, Davison’s Sarah Meyer and New Lothrop’s Kelsey Moore were named as co-MVPs. Meanwhile, Parker Viele, of Byron, was named the MVP for the black squad.

As for the baseball game, the score ended in a 6-5 advantage for the Gold team. Flushing’s Jacob Murphy managed to record a game-winning hit for the Gold team on his way to capturing the team MVP award. Grand Blanc’s Brandon Bednar was named as the MVP for the Black squad.

On the mound, Swartz Creek’s Sam Anderson was given the game’s Most Outstanding Pitcher award. Afterward, both Colin VanderGronden of Montrose and Chase Coselman of Fenton were named as co-winners of the Genesee Area Mr. Baseball award.

Thursday night’s basketball games, again at Ballenger Fieldhouse, were highlighted by two great games that began with a tough matchup on the girls’ side. The Black team, featuring

The Gold team featured Shakara Johnson of Carman-Ainsworth, Morgan Johnson of Flushing, Ashley Chema of LakeVille, Samantha Thick of Lapeer and Zippy Porritt of Davison. Byron’s Ashley Glass was also selected to the team, but was unable to play due to injury.

Jasmine Robinson of Flint Hamady was named the MVP for the Black team while Samantha Thick took the honors for the Gold team.

The boys’ game ended in a 124-107 advantage for the Black team. Grand Blanc’s Thomas Cook, Flushing’s Joe Kujat and Atherton’s Victor McEwen all participated in the event, along with others from Beecher, Clio, Flint Hamady, Lake Fenton, Flint Northwestern, Flint Southwestern, Saginaw, and Ortonville-Brandon. Darius Young of Flint Northwestern received the MVP honors for the Black team and Henry Speight from Saginaw took home the award for the Gold team.