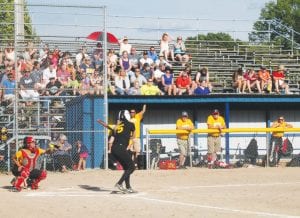 Fans look on during the softball portion of the Bruin Classic on Wednesday at Whaley Park.

Carman-Ainsworth’s Leon Bell was invited to play in the baseball game, but could not attend due to a prior engagement.

Results from the baseball contest were not reported, however, the softball game turned into quite a contest with the Black squad taking a 5-4 win.

“Gold (team) rallied for runs in the bottom of the eighth inning and had the tying run at third and the winning run at second with one out,” said Mott softball coach Rodney Studaker. “Ground ball to third, threw the batter out at first and tagged a sliding runner from third out at the plate for the double play that ended the game.”

Most notably, Lapeer’s Hunter Conzlemann was named MVP of the Black team, pitching a shutout for the first five innings before coming back in relief in the eighth inning to finish off the game. The MVP for the Gold squad was North Branch’s Jackie Jones, who registered three hits in eight innings.