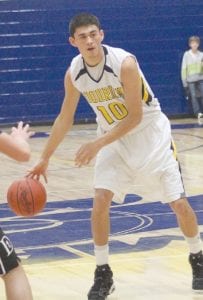 Goodrich’s Mitch Rubio (#10) will represent his school at the upcoming All-Star game in Genesee County.

FLINT — The 21st Annual Mott Bruin Club All-Star Basketball Game will take place today at Mott Community College. Lapeer West grads Cullen Turczyn and Zeshawn Jones-Parker will participate in the event and have one last chance to play together on the court.

The men’s game will take place at 8 p.m. At halftime of the men’s game, Swartz Creek’s JD Tisdale and Flint Northwestern’s Andre Yancy will participate in a slam dunk contest.

Two of the top players in the state, Mr. Basketball and Flint Beecher grad Monte Morris, and Carman-Ainsworth’s Denzell Watts will be unavailable to participate in the event as they had to report to college before the game. Morris is attending Iowa State University while Watts is attending the University of Alabama-Birmingham.

The women’s game will precede the main event of the night and tip-off at 6 p.m. As of Tuesday, Mott had not released rosters for the game.