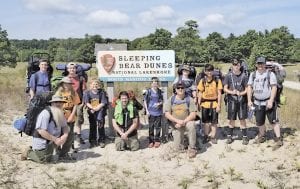 LELAND TWP. — The legend of the Sleeping Bear Dunes and Manitou Islands have slight variations, but the most prominent one tells the tale of two bear cubs that died setting out to swim across Lake Michigan.

Their mother lay down on the shore for an eternal vigil for her perished cubs.

Recently, the Boy Scouts from Troop 31 at the Court Street United Methodist Church found themselves with 25 pounds of gear strapped to their back and on board the ferry to the larger of the two cubs, the beautiful island of North Manitou along the Sleeping Bear National Lakeshore.

The eight adventurous scouts (six from Troop 31 and two from Troop 115) and 5 adult leaders backpacked eight miles and countless hiking miles on the island for five days from Aug. 8-12.

Starting from Leland’s historic Fishtown, a nice leisurely ferry took them to their destination. The island of North Manitou is approximately eight miles long and four miles wide with 20 miles of lakeshore. It sits six miles off the shore of the Leelanau Peninsula in norther Lake Michigan. It is listed by the National Park Service as a Wilderness area and it truly is.

After wandering around a bit to get their bearings, the troop chose a camping location in the middle of the island at Lake Manitou. The boys discovered Lake Manitou to be a gorgeous oasis. Certainly, a place to spend the next few days.

After the tents were up, the splashing and swimming commenced. Dinner was not much of a consideration when you’re having fun. But as many of the scouts had never backpacked in a Wilderness area before, many a new skill was learned.

One lesson the scouts, both young and old, learned on the island is that the trails marked on a map are not always easily found. A hard lesson to learn when you go out for an eight-mile day-hike which turns into a 15-mile allday hike because you couldn’t find the secondary trail.

Backpack cooking was another skillset learned by many of the scouts. When you have to carry all your food for five days, your cooking skills can really come into play. Based on the experience of the scouts, meals ranged from simple Ramen Noodles to more sophisticated freeze-dried Lasagna to a full out homemade pizza.

The troop made it back to Fishtown on Monday afternoon, not too much the worse for wear. No tick bites but with a sunburn or two from too much time spent in Lake Manitou. The new scouts to the troop have come to view North Manitou as a rite of passage to joining the Boy Scouts. Each one of them passed with flying colors.

Boy Scout Troop 31 is best known for being the oldest Boy Scout troop in the area, now celebrating more than 100 years in scouting. Troop members hail from all over the area including Burton, Davison, Flushing, Grand Blanc, Lapeer and Kearsley.

The boys enjoy regular campouts and are active in the community, just recently manning the start line and handing out water bottles at the Crim Festival of Races.