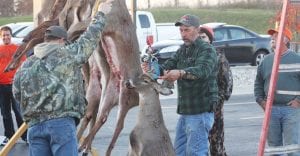 Workers at the Genesee County buck pole in Davison score and prepare to hang another buck brought into the big buck contest in a past season.

The Genesee County buck pole at Madden’s Lounge on State Road also draws a healthy crowd and has an equally big number of supporters and prizes up for grabs. The Flint River Chapter of Safari Club International is the main sponsor and winners last season won a free ticket to the Club’s Christmas dinner. Shoulder mounts, guns, cross bows and monetary prizes are similar to the other poles.

This is the second pole this season for the Genesee County pole after the youth in the area earned certificates and prizes at the Sept. 21 Youth Hunt pole.

All poles open at daybreak and most expect the last deer to be registered by 8 p.m. Prizes and winners announced around 8:30 p.m. unless otherwise noted.

Lapeer will see its last year of the highly-attended pole at Ray C’s Extreme Store before it moves south to the new site of Ray C’s store south of I-69 next year. Now in its 10th year, the Lapeer County pole grows in popularity every season.

“We do have a lot more vendors this year,” said Heather Camacho, merchandise manager for Ray C’s Extreme Store. “Monster Energy, Peaza, a vendor that offers a tea product to help curb chewing, are new and a lot of our usual vendors including Country Smoke House of Almont and Jim Riehl will be here with a few vehicles. We will also have a lot of items for silent auction prizes.”

Camacho noted that if construction plans go well into next year at Ray C’s new larger store south of I-69 on M-24, the pole will move there for next season. To commemorate the last pole in Lapeer and because opening day falls on Saturday this year, Camacho added that the party will be a much bigger one and likely will go later. Winners are expected to be announced around 9 p.m. because the last buck that can be registered must be brought in by 8 p.m.

To get the fun started, on Friday, Nov. 14 the annual fundraiser for Wheelin’ Team 457 of North Branch will send founder and President Ray Brown up to his perch atop the buck pole out front and center at Ray C’s Extreme Store. The public can purchase tickets to either bring Brown down, or as in past years, keep him on the pole longer. Funds raised go toward the Wheelin’ Team 457’s shooting programs and outreach programs that help hunters and air rifle shooters with disabilities get involved. The pole opens at 7 a.m.

To the north, the North Branch Area Business Association will host its annual pole at the North Branch Food Center and Self-Serve Lumber on M-90. A large warming tent serves as the location for the chili competition and other contests. The day-long events that keep folks busy while they await the bucks brought into the big buck contest include a chili cook off from 4-6 p.m. presented by area businesses. Samples are available for the public to choose their favorite.

The biggest buck top prize is a shoulder mount, a $500 value sponsored by Hampton Taxidermy and NBABA. Winners of the first buck to the pole, youngest hunter, oldest hunter and first woman to bring in a buck each win $50. An appearance from Monster Truck, food and refreshments and lots of chances to enter for local prizes at the Business Expo round out the day. Raffle prizes include: First Place: Savage 220 Slug w/ scope and case; Second Place: crossbow w/case; Third Place: ladder tree stand. Tickets are $2 for three tickets at a variety of area businesses.