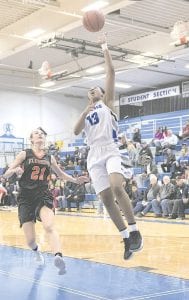 AREAWIDE – The Basketball Coaches Association of Michigan awarded several area girls, as well as their teams, for their accomplishments both on and off the court this past season. Almont’s Meredith Rinke was selected as an All-State Honorable Mention while Goodrich’s Maddie Voelker was selected as one of BCAM’s best.

However, selected to the best of the best was Carman-Ainsworth’s Destiny Strother. Qualifying for Individual Academic All-State was Kendal Muxlow of Brown City with a 3.67 grade point average, Rinke had a 4.00 and Marlette’s Emily Schaub a 3.96.