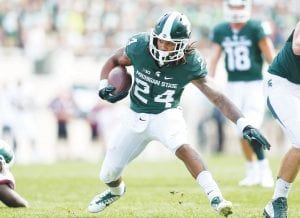 Carman-Ainsworth grad Gerald Holmes carries the rock for the Michigan State football team. Holmes has earned the starting running back position after starting the season at No. 3 on the depth chart.

EAST LANSING – Gerald Holmes, a sophomore on the Michigan State University football team, has worked his way into the starting running back position for the Spartans.

Holmes began the season at No. 3 on the depth chart behind LJ Scott and Madre London but has shown just why he was one of coach Mark Dantonio’s top recruits in 2013, where he was redshirted.

As a redshirt freshman in 2014, Holmes had 44 rushing yards on 15 carries in three games (Jacksonville State, Eastern Michigan and Ohio State) and had eight carries for 28 yards in his college debut against Jacksonville State.

In eight games this season, Holmes had 392 yards on 79 attempts with six touchdowns. He also has five receptions on the season.

Holmes is projected to once again play a key starting role against Ohio State on Saturday. Kick-off is at 3:30 p.m. Look for No. 24 to line up behind quarterback Connor Cook often. It’s his role until someone else takes it away from him.