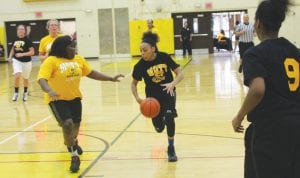 FLINT — The annual Bruin Classic All-Star basketball games took place last Friday at Mott Community College’s Ballenger Field House in Flint. The girls’ game resulted in a 66-57 win for the Gold squad while the Black squad pulled out a thriller in the boys’ game, 116-114.

The Gold squad held a narrow 36-34 lead at the half before ending the contest on a 30-23 second half run. On the boys’ end, Davison’s Frank Vukaj was named Gold team MVP and the Black team’s MVP was Cedric Moten of Flint Beecher.

At the half of the boys’ contest, the Black team led 52-45, which was followed by a 69-64 run for the Gold team in the second half that fell just short.

Carman-Ainsworth’s Juwan Evans was on the boys’ Black squad while Natalia Kincaid joined McDonald on the girls’ Black team. Evans tossed in four, Kincaid had six and McDonald poured in 24 points. — B.P.