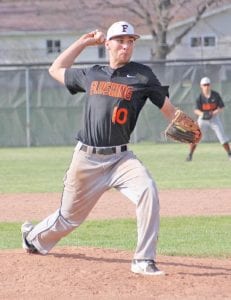 Flushing’s Garrett Oginsky will represent the Raiders in Midland on July 13.

MIDLAND – Several recently-graduated players from across the area will take the field at the second annual North/South High School All-Star game at 6 p.m., July 13 at Dow Diamond. Two athletes from Flushing – Garrett Oginsky and Hunter Bollinger — will be playing for the North in this contest. Noah Jankowski of Kearsley and Goodrich’s Landin Mitchell have also been selected to participate.

“We’re trying to get the best of the best from the North and the South. We’ve talked about it for many years and hopefully this one will be even better,” said event organizer Shawn Brown, Mott Community College’s men’s baseball coach. “We’re still in the infancy stages of separating areas like Bay County and Genesee County. There are a couple players on the outside to the south like Imlay City’s Lesniak and Bay County has two kids from Standish. We don’t want to open things up too much. Maybe down the road we might, but for now we like it the way it is.”

Flushing’s Hunter Bollinger will also take the field at Dow Diamond on July 13.

While Oginsky most recently took the field at the Bruin All- Star Classic on June 20 at Whaley Park, he’s also the quarterback on the Flushing football team and played in the All-Star gridiron game at Davison in May. In a pair of wins at Haslett at the end of April, Oginsky also got the victory on the mound in the first game and in the second contest walked three times and scored twice.

“Every time we have the Bruin All-Star game in Flint we’ve always talked how it would be if the North and the South played each other because of the talent pools and everything,” Brown said. “We decided to make it happen and last year was such a great success. We knew once this got going it was going to be huge and now it seems like everybody wants a part of it.”

This season Bollinger helped Flushing amass a record of 25-9 overall, 11-3 Flint Metro League. Prior to getting eliminated in districts by sixth-ranked Saginaw Heritage 10-0, highlights in 2016 for Bollinger included a hit and two RBI in the opening contest as the Raiders swept Clio 3-0 and 6-1 in late April. During a Metro doubleheader in early May at home the squad beat Holly 7-1 and 16-6 as Bollinger posted two hits and two RBI in the initial contest.

“I can’t thank the parents, coaches and players enough for doing this. The Flint Baseball Commission was also very big behind this,” said Brown. “This was a dream of mine and I’m happy to see it’s going to happen.”

Mitchell, on the other hand, played in the Bruin Classic All-Star game hosted by Mott Community College in Genesee County on June 20 for the Gold Team. During the regular season Micthell also earned All Genesee Area Conference- Red first team honors as a utility player to help his team finish with a record of 20-16 overall, 11-1 league.

Jankowski has been one of the top performers in the Flint Metro League during his career. He was named to the All-League Second Team at catcher this past season.

He was named to both the All- District and All-Academic teams. He hit .345 in the Flint Metro League this season.

Jankowski was named the league’s Scholar Athlete of the Month in April. He also made the All-League First team as a junior and was First Team All-District that same season.

Jankowski was a First Team All- District selection in both his sophomore and junior seasons. He was a Second Team All-League choice as a sophomore.

Throwing out the first pitch will be former major leaguer and current Bay City area resident Matt Mieske, who played for the Milwaukee Brewers, Chicago Cubs, Seattle Mariners, Houston Astros and Arizona Diamondbacks from 1993-2000. Brown is also trying to get the eight-year-old who sang the national anthem at last year’s game to return.

“Next year we’ll work on (former University of Michigan and New York Yankees pitcher) Jim Abbott. We can get celebrities, but we want the ones from the area who played,” Brown said. – M.S./K.W.