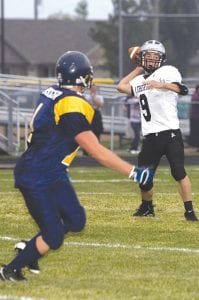 FLINT— Although most people are unaware, semi-pro football has been a staple in our area for quite some time. Many may remember the now-defunct Flint Falcons, who won over 30 games in a row on their way to back-to-back Michigan Football League titles in 1993 and 1994. Turmoil amongst coaches and players put an end to the historic squad in 2001, which was often ranked as one of the top semi-pro football teams in the country. Other recently defunct teams in our area include the Michigan Admirals, Genesee County Patriots and Lapeer County Lions. Currently, the Fenton High football field plays host to the Flint Rampage of the Great Lakes Football League.

Since 2003, the Flint Fury have defended the turf at Flint’s Atwood Stadium, with the majority of their roster comprised of former high school stars from around the area. One in particular is current starting quarterback Matt Terry, who starred under center for the Atherton Wolverines. After a non-league loss against the cross-town rival Flint Rampage, Terry responded with a breakout game the following week against the Detroit Redd Doggs. The Fury took a 43-0 win over Detroit, with Terry throwing three touchdowns and rushing for another.

Four players from Carman- Ainsworth are listed on the Fury’s roster. Dominique Harris is a 6-foot-3, 265-pound lineman, who was a First- Team offensive tackle on the All-Big Nine Conference team last fall. He signed a national letter-of-intent in February to attend Reedley College, a junior college in northern California. Caleb Potter is a 6-foot-3, 185-pound defensive lineman, who graduated from Carman-Ainsworth in 2009. Matthew Fisher is a speedy running back who graduated in 2010. He anchored the Carman-Ainsworth 400-meter relay team and led the Cavaliers to a 44.8 clocking in that event. Elijah Marshall, who began his high school career as an All-City quarterback at Flint Central, transferred to Carman-Ainsworth and is now listed as a defensive back for the Fury.

Once the Fury got into their league schedule, the team began to tail off. Not due to a lack of talent, but the fact that the Fury play in one of, if not the toughest league in the country, the Elite Mid-Continental Football League. Flint would open up league play with a 35-0 loss at the Southern Michigan Timberwolves, who are easily one of the better teams in the state. The following week would see the Fury squeak out an 18-16 win in the final minutes of a match-up with the Cleveland Saints. However, a post game altercation between the two squads would prove to be costly for the Fury.

Flint then traveled to Racine, Wisconsin to battle the division-rival Racine Raiders, only to fall, 41-6. Their next game was scheduled to be played at Atwood Stadium against the Michigan Gators. When VIEW Newspapers arrived to cover the game, not a single car was in the Atwood Stadium parking lot.

“The game was canceled at Atwood because of the altercation with the Cleveland team,” said head coach Charles Lawler.

The game was then moved to the Gators home field in Plymouth, where the Fury were routed, 66-0, for the worst loss in team history.

After failing to make the trip to Kentucky to face the Louisville Bulls, the Fury not only had to forfeit the game, but also were forced to forfeit their next game, a home game against the Racine Raiders. A re-match with the Michigan Gators this past Saturday resulted in a 27-7 loss. The Fury are now 2-7 overall, and 1-6 in the EMCFL. After consecutive forfeits for Flint, many semi-pro message boards have speculated that the team may be folding, which was proven false when they took the field Saturday.

“The team is still intact, we just had trouble ever since the Saints altercation. Everything stems from the Saints game. We still got (two) more games left, at Atwood,” said Lawler. “The final (two) games will be played accordingly.”

The Fury return home on August 13 for a re-match with the Southern Michigan Timberwolves. Their season will conclude at Atwood Stadium on August 20 against the Toledo Raiders. Details: www.flintfuryfootball.com.