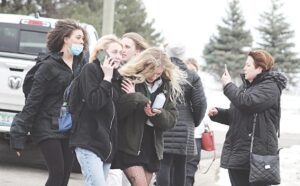 The shooter, a sophomore, was quickly taken into custody. He was not injured.

Seven other people, including one teacher, were wounded in the attack.

“Deputies confronted him, he had the weapon on him, and deputies took him into custody,” said Oakland County Undersheriff Scott McCabe. The weapon was a semiautomatic handgun. “The whole thing lasted five minutes.” McCabe told reporters it’s currently believed about 15 to 20 shots were fired in the school shooting.

He said the school did “everything right” and had everyone barricade in place.

Tim Throne, superintendent, Oxford Community Schools, called the shooting “shocking” and “horrifying” in a press briefing held shortly before 3 p.m. outside the Legacy Center — across the road from the Meijer store that closed to the public to serve as a unification center for parents to gather their children. 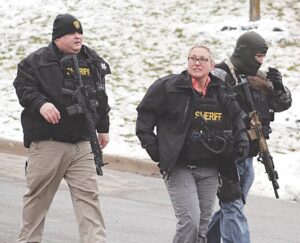 McCabe said the student in custody was the lone shooter, and there was no other danger to students or the public. There were no other weapons found in his possession, or in his locker at the school. Police at this time have no motive why the student brought a gun to school or whether he intentionally targeted any of the victims. The shooting suspect, said McCabe, has asked for an attorney.

Two of Tuesday’s shooting victims were transported to McLaren Lapeer Region, a Level II Trauma Center, including the 47-year female teacher who was treated for a grazing wound to her shoulder. She has been released from the hospital.

A McLaren Lapeer spokesperson said he second victim, a student, was treated and transferred to Hurley Medical Center in Flint.

According to the Oakland County Sheriff’s Dept., the victims and their injuries include:

• 14-year-old girl in critical condition with chest and neck gunshot wounds. She is on a ventilator after surgery.

• 15-year-old boy in critical condition with a gunshot wound to the 12 head.

• 15-year-old boy in stable condition with a gunshot wound to the left leg.

• 17-year-old boy with gunshot wound to his hip.

• 17-year-old girl in critical condition with a gunshot wound to her chest.

• 47-year-old teacher who has been discharged from McLaren Lapeer with a grazing wound to their shoulder.

A fourth fatality, police announced Wednesday, was Justin Shilling was 17. He died about 10 a.m. Wednesday at McLaren Oakland in Pontiac.

Lapeer County law enforcement agencies and EMS units from the county responded in large numbers to the active shooter scene.

Police from Grand Blanc Township and the Genesee County Sherriff’s department were also reportedly on the scene.

A fourth officer, the K9 unit, was deployed as well. “I called in eight additional officers, and I deployed Lapeer officers to four points in the county since so many sheriff units responded to Oxford.”

Lapeer County Central Dispatch put out a call for all available ALS (Advanced Life Support) ambulance units in the county to respond to Oxford High School. Three of the shooting victims were transported to McLaren Lapeer Region, a Level II Trauma Center, four were transported to McLaren Oakland and one to St. Joseph’s Pontiac. According to reports, there was also one walk-in patient to Ascension Rochester.

Lapeer County EMS and Medstar units based in Lapeer County were among 60 ambulances sent to the shooting scene. A couple medical evac helicopters, including from the University of Michigan-Ann Arbor and Medstar, were dispatched to the school as well.

Students who evacuated the school, some who reportedly jumped out windows, assembled at the nearby Meijer store on North Lapeer (M-24) and Ray roads.

When The County Press arrived on scene, students were still coming down the hill from the school toward the Meijer store. Law enforcement and school district officials directed the students to the lawn and garden entrance to the store that served as a check-in point.

Students, many without coats wearing only T-shirts or other inside attire, shivered in the cold while on their cell phones to reach their families. Many embraced one another in hugs with classmates, school staff and parents.

This County Press (View Newspapers) reporter observed several small groups huddled together in the Meijer parking lot, hand-in-hand, in prayer for the victims. A few clutched rosaries in their hands.

Tuesday and Wednesday some Genesee County school districts had messages on social media showing support for the community of Oxford, as well as offering reassurance to their students and parents about school safety.

Paul Gaudard, superintendent of Kearsley Community Schools, said in a statement on Facebook: “The tragic events that unfolded at Oxford High School yesterday hit close to home for many of us. Our thoughts remain with the entire Oxford community as they deal with yesterday’s tragic events.

“Please know that your student’s safety and well-being remain our top priority. We are committed to creating a safe school environment for all students, staff and visitors to our buildings. In addition to employing a district security team of two retired law enforcement officers, our entire staff participated in ALICE (Alert, Lockdown, Inform, Counter and Evacuate) active shooter training in August.”

Ben Mainka, superintendent of Swartz Creek Community Schools said on the district’s Facebook page, “I am writing you today with a very heavy heart as there was a school shooting at Oxford HS, in Oakland County today that claimed the lives of three high school students and injured several others. Please keep the families and community in Oxford in your thoughts and prayers as they grieve and deal with a very difficult situation.”

A message on the Goodrich Area Schools’ Facebook page from Superintendent Wayne Wright said, “Any school shooting is a tragedy for the entire community, but to have it happen so close to home was shocking. The students, staff, parents, first responders, and the entire Oxford community are in the hearts and minds of every Goodrich Martian today.”

In Davison Community Schools, parents reported on social media an increased police presence around Davison High School as added comfort to the community following the events in nearby Oxford Township.