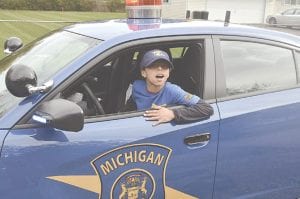 DAVISON TWP.— A Davison Township boy with autism received the wish of a lifetime when local police officers and first responders attended his birthday party over the weekend.

Last Saturday, a procession of police and emergency vehicles arrived at the home of Johnny Porter in Davison Township. Johnny, 13, had invited local law enforcement personnel to attend his birthday party via a special request that he and his family made through the Voices for Children Advocacy Center.

Johnny had also sent a letter to local police departments, asking them to come to his party. In response, over 50 officers and police chiefs from 11 local law enforcement departments—along with firefighters from the Davison-Richfield Fire Department and first responders from Swartz Ambulance—teamed up to make Johnny’s birthday an unforgettable experience.

Many officers came to the party bearing gifts for Johnny, including a new bike and a new winter coat. Johnny also got to hop in a Michigan State Police cruiser and climb aboard the Davison-Richfield fire truck. 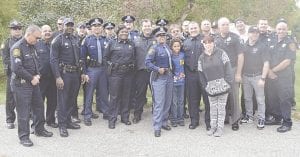 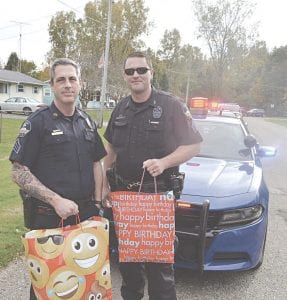