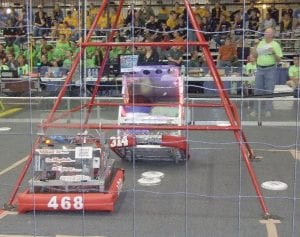 The colorful Carman-Ainsworth robot 314 (The Megatron Oracles (Big Mo) takes a high shot at the goal with a speed of light frisbee style during elimination matches at the Kettering Kickoff competition.

FLINT — Robotics teams from area high schools came together with more than 40 local and regional teams for the Kettering Kickoff First Robotics competition at this weekend in Flint.

Goodrich Team 70 made it all the way to the quarter finals and 494 made it through the semi-finals, as did the Grand Blanc Enginerds and Robot 2337. They are currently paired with Team 1684 from Lapeer East and West High Schools, and Team 1243 from Swartz Creek High School until the next level of competition.

“Both teams competed hard and had a great competition,” mentor Pat Major said.

The Kettering Kickoff is a popular annual contest that matches the robots from last season’s FIRST Robotics with this year’s high school teams. Kettering University has been the proud host of this competition since 1999.

Robotics competition is similar to organized chaos, the first time you go to a match, but it really is a well ordered machine — of course! Using a combination of motors, controllers, wireless communications, metal gears, and sensors, as well as other parts and applications, students program their robots to operate in both autonomous and drivercontrolled modes on a specially designed field. 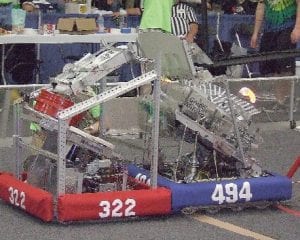 Goodrich Martian’s robot 494 is blocked from maneuvering through the arena with a strong head to head push from the Flint Fire #322 robot.

Part of the competition involves a little good natured role reversal in the Mentor Tournament where coaches who are with the students all year get to drive the robots and the students coach them through what they’re doing.

Elimination matches were held throughout Saturday with some rough jousting in the arena as teams jockeyed for points in shooting Frisbee style discs into the goals, as well as competing for the essential “Climbing Points”, where the robot must climb the first level of the metal tower and be completely off the ground to qualify for points by the last buzzer.

According to Enginerds Mentor Brandi Bolinger, they are still recruiting GBHS students as well as any adults with Mechanical, Electrical, Programming, Business, Project Management and Marketing/Publishing skills to help this season.

The Enginerds currently meet on Mondays and Thursdays from 6:30-8:30 p.m. at Premier Tooling Systems, located at 3111 Tri-Park Drive in Grand Blanc. Students and adults who are interested in joining should attend a team meeting to have a tour of our facility, be introduced to the Team, and see if it’s a good fit for them.

More detailed information on the teams can be found at: www.team2337.com, www.70moremartians.com/index.html, www.494themartians.com/ Besides competitions, the robots can often be seen participating in various community events and fundraisers throughout the year.