Area student makes it to final round in National Marbles Tournament 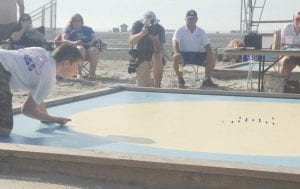 It was the third year Frazho had attended the event, and his first time going all the way to the final game. He lost by a single marble to his opponent.

The tournament is held on a boardwalk overlooking the ocean, where male and female contestants between the ages of 7 and 14 play for the title of “King” and “Queen” and a $2,000 scholarship.

The week begins with three-days of preliminaries – each of the 26 boys played back-to-back games (a total of 50 for each player) for a top-eight ranking to advance to the semifinals. Out of the 50, Frazho won 45 of his matches; seven of which were classified as “sticks,” where he knocked out all seven marbles on his first turn.

Frazho will receive a trophy for achieving the highest number of “sticks” in the preliminary rounds.

During the finals, Frazho played a total of 15 games – after losing eight and winning seven, it came down the last game and final marble before he was eliminated. Pat Frazho, Josh’s dad, said the end game puts an intense amount of pressure on the players due to the large crowd of onlookers. Josh said he felt “excited and anxious” as he advanced to the end rounds.

“It was definitely a little nerve-wracking as a parent,” said Pat.

Although 2017 is the year Josh ages out of the tournament for good, he plans to continue trying to garner interest for a local marbles club to teach newcomers the ins and outs of the game. He and his dad have already started their own chapter in Genesee County and are hoping to reach out to local organizations – such as local Boy Scout troops – to recruit new members for practice beginning in November.

Pat and Josh also plan on working with the schools to gauge the appeal of the game to students.

For more information on joining the chapter, contact Pat Frazho at GeneseeCountyMarbles@gmail.com.