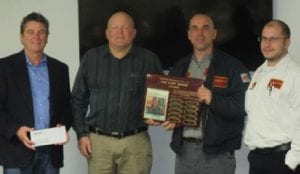 The Curt Maser Award is given each year to the Goyette Service Technician that exemplifies excellence in Customer Service, Training and Certification. The annual George Hier Award is designated for installation services as well as professionalism and customer reviews. This is the first time either of the recipients has received these distinguished service awards.

The naming of Mr. Gibbs marks the first occasion that a Goyette Electrician has been named the Hier Award recipient. Long known as a primary provider of service for Plumbing, Heating and Cooling, Goyette Mechanicals Electrical Division has become a market leader as well.