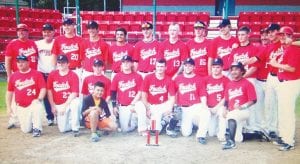 Hand-picked 16-year-olds from Lapeer and Genesee counties make up the inaugural Strike Zone Team Foutch that qualified for the Mickey Mantle World Series.

Foutch’s team is playing in its inaugural season as Foutch’s Strike Zone out of Flint Twp. after a lot of work since the past winter to put together the best 16-year-old players from the local high schools. The team is comprised of 18 kids from high schools in Genesee and Lapeer counties that finished with a 28-6- 1 record, won league and state championships and won a regional title over the weekend to qualify for the Mickey Mantle World Series. Foutch’s Strike Zone is just the second travel baseball team from the Flint area to qualify for the World Series.

“Kyle and Kevin get a once-in-a-lifetime chance to go to the World Series,” said Grumley. “I can’t go because of work obligations, but they’ll travel with some of the other coaches and it should be an outstanding experience for them to get to play with 10 teams for a national title. I’m pretty thrilled for them.”