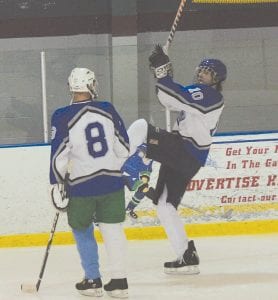 BURTON — Anytime a first annual event is put on, expectations are high for a good turnout, but also realistic.

“The tournament was unbelieveable,” Lemieux said. “I had no idea it could ever be this big. Friday night 200-300 people came in a short span to watch and the parking lot was jammed full and people had to park on the grass and along the entrance drive.”

Lemieux said everyone involved, fans and players alike, took advantage of the family opportunity to come out and watch the old and young alumns battle on the ice.

“I think the old guys had their parents come out and the collegiate and junior kids also had their family come and watch them play hockey. It came from the young and the old.”

Even before he knew how successful the tournament was going to be, plans to expand in the coming years were being considered and implemented. That included expanding the teams to 20 or more because several teams had three squads that they had put together, but Lemieux was only able to accommodate one.

“We can fill up 20 teams next year, otherwise we would have to move to a larger arena, which is unheard of for a alumni tournament,” Lemieux added. “I’m still in shock about the success of this past weekend, but I’m looking to have 20+ teams next year. But, we’re going to aim for 20 to split it up into divisions so all the players have a chance to play. “

The heart and love of the sport was evident all around as Lemieux detailed how the Lapeer East team advanced to the semifinals to take on Grand Blanc.

“They had a 43-year-old player, 6- foot-5 and he was just in the moment. When East won, he raised his long arms in the air and just skated around as if he was back in the day of his high school team. After he came off the ice, many of us greeted him and he said, ‘Did I really just do that?’”

The games were a battle from the first drop of the puck and one division included several shootouts to determine the winners.

In Sunday’s semifinals, Powers beat Davison, 10-4, and Creek blanked East, 6-0. That set up the final against Powers and Creek with Powers claiming the trophy, 8-2.