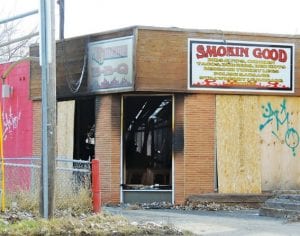 FLINT TWP. — Many good memories were rekindled by a fire last Friday, which sadly finished off a vacant commercial building at 2485 Flushing Road near Ballenger Hwy. For decades the business operated as Paddy McGee’s Irish pub, a very popular gathering spot circa the late 1970s to 1990s.

Fire investigators say the fire was intentionally set that gutted what was left of the vacant building.

There were no injuries and the fire remains under investigation, said Sgt. Dan Kelly, of the Flint Township Fire Department.

The call came in about 3:27 a.m. on April 11, Kelly said. First units arrived to find 70 percent of the building engulfed in flames, they were able to subdue the fire quickly with a water cannon on top of the fire truck and had it extinguished within an hour, Kelly said.

Exterior signage indicate that the building formerly housed Peera’s Restaurant and Pizzeria and J& J One-stop Barbecue, but Kelly said the last known use was as a church.

The owner told fire officials that he had been having breakins two weeks before the fire, Kelly said. Gas, electric and other fixtures had been stripped from the building.

The night before the fire the owner covered the windows with plywood to protect them but the boards were ripped away by whoever entered the building and set the fire in the rear southwest corner.

Sgt. Kelly said he also had fond memories of attending lively gatherings at Paddy McGee’s restaurant and bar, which has been closed for at least ten years.

“It was sad to go there and see what it has been reduced to,” Kelly said.

Mutual aid was provided by the Flushing, Mt. Morris Township and City of Flint fire departments.