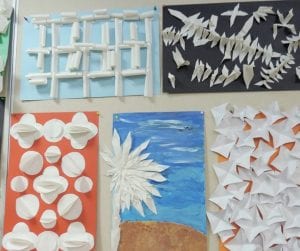 For this project, students began with circles, squares, triangles and rectangular shaped papers, which were rolled, folded then arranged into unique patterns. Left, this baseball themed three-tiered cake was among many more creative designs.

At the end of the year, Crandall combines the cream of the crop into an open exhibit in the Media Center. Parents and others attending the annual CAMS Art Fair last week were treated to a kaleidoscope of art techniques students learned during the year.

“It is really awesome to show them all off together,” Crandall said. “I have lots of favorites.”

One wall held an assortment of collages created from folded shape cut-outs arranged into a pattern. Another large gallery featured drawings of an Indian tree reflected in water. Above them were a series of large, multi-colored flowers made from dried glue and oil pastels.

Another larger gallery featured Sacred Circles created from hand prints and chalk on black paper. A single eye peered from another colorful assortment in which students were asked to incorporate an eye in a surreal color pencil blending technique. 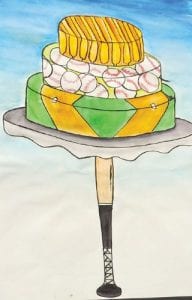 Yet another series of drawings were based on the whimsical landscapes of Canadian artist Emily Carr, said Crandall. Seasonal work on display included

spooky haunted houses from Halloween and vividly painted skulls from the Day of the Dead, a Mexican holiday honoring deceased relatives held in late October and early November.

Origami, Anime, Zentangle, positive/ negative prints and many more art techniques were featured including a few enterprise designs by students who worked on them independently after finishing the class project. 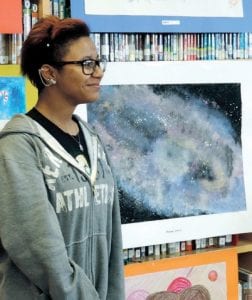 CAMS student Anjewel Lenoir stands next to her one-of-a-kind piece that she calls “My Soul.”