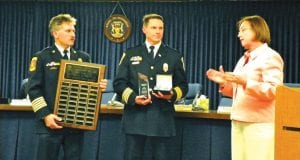 FLINT TWP. — Assistant Fire Chief Michael Burkley has been named 2012 Firefighter of the Year by the Genesee County Association of Fire Chief’s and was recognized for the achievement by the township board Monday night.

“I am proud to say that Assistant Chief Burkley was given that award based on a variety of things,” said Fire Chief John Ringwelski,

One was spearheading the acquisition of training trailers for which he wrote the grant to get about $180,000 in federal funding and also led the effort to raise about $40,000 in local matching money.

Burkley also coordinates use of the training trailers which travel all over the county for fire departments to practice firefighting techniques in a safe, controlled environment, including real fires burning inside, Ringwelski said.

Further, Burkley worked to put together a Rapid Intervention Training (RIT) that brought in instructors from Oakland Community College to teach firefighters in Genesee County how to rescue themselves and fellow firefighters, Ringwelski said.

RIT training still is actively ongoing and is a mandatory effort taking place nationwide, he said.

Because of those efforts, Burkley was voted unanimously by county fire chiefs to receive the Firefighter of the Year Award which was presented at a special event on March 23.

Burkley said he was surprised by the honor.

“I could not have done it without a lot of support from the (township) board and other fire chiefs,” he said at the township board recognition.

Township Supervisor Karyn Miller said the board wanted to specially acknowledge the significance of Burkley’s award.

His name has been added to an engraved traveling plaque that will be displayed at the township fire station until next year when a new honoree is chosen.

Miller told Ringwelski she would also like to get an engraved plaque created for permanent display at the fire station.

She noted that Burkley also received an engraved trophy and a firefighters watch and money clip.

“They loaded him up with gifts,” she said.

Ringwelski joined Miller in acknowledging Burkley’s honor which received thunderous applause from the audience at the meeting, who were invited to stay afterwards for a celebration cake.

Miller also noted that at the same event where Burkley received his award, Fire Chief Ringwelski was named president of the county Fire Chief’s Associationforaaone-yearterm.

Ringwelski said that during his presidency he will continue emphasis on more specialized training for firefighters.

Another of his goals is to push for establishing a countywide Community Emergency Response Team (CERT). That is community-based team of citizen volunteers recruited and trained to work with emergency personnel in public safety and community service projects. CERT services might range from natural disaster response to floods, tornadoes and such to helping with crowd control at events such as the CRIM road race, Back to the Bricks and local carnivals.

CERT recruitment can include teens with an eye to sparking an interest in public safety careers, Ringwelski said.

There currently are CERT programs in more than 2,200 communities nationwide, according to the Federal Emergency Management Agency, which supports and promotes CERT programs and training.