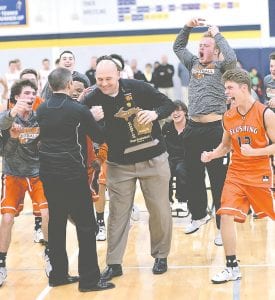 Paul Brieger is moving from athletic director at Flushing to Corunna.

GENESEE COUNTY – With the many offseason changes that schools and leagues in the area have been experiencing since the conclusion of the spring season, Carman- Ainsworth and Flushing added on to the list with the additions of new athletic directors after the departures of their respective athletic directors. Carman-Ainsworth’s Kevin Foltz is headed to Flushing, being replaced by longtime Carman-Ainsworth teacher Mike Gates, and Flushing’s Paul Brieger is headed to Corunna.

Foltz opted for the Flushing position because of his emotional connection to the school. As a 1996 Flushing alum and resident of Flushing with three kids in the district, Foltz hopes that the move will allow him to watch his own kids grow and develop in school and sports.

“Carman-Ainsworth was a great place to work and I will surely miss the staff and many of my close friends that work for Carman-Ainsworth,” Foltz added.

Former Flushing athletic director, Brieger is to become operations principal at Corunna High School after the position became available due to a retirement. Brieger took the position as he is a resident of Corunna, his wife teaches in the district and his two children attend school there with hopes he will also be able to attend his children’s events more easily.

“I am great friends with Kevin, so I was excited to see him get the position,” said Brieger of the changes. “He is a Flushing grad and was a standout student-athlete. We inducted him into the Athletic Hall of Fame a couple years ago. He went to college on a cross country scholarship. I love the fact that he is able to lead the athletic department of the school that he graduated from.”

Brieger faces a tough challenge at Corunna, as it was one of the three schools left hanging in the balance with the changes that the Genesee Area Conference-Red was handed just weeks ago. Durand, Montrose, LakeVille, Byron and Mt. Morris are all departing the league to form their own starting in 2018-19, leaving Goodrich, Lake Fenton and Corunna to fend for themselves. Although Brieger has not taken on a position within the athletic department, his experience will surely come in handy in sorting through Corunna’s future athletic path.