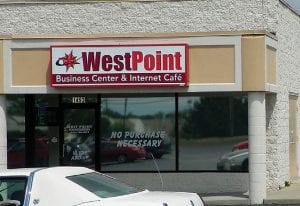 The Attorney General’s Alcohol & Gambling Enforcement Division issued "Cease and Desist" letters to the "Internet Sweepstakes Cafes" that are alleged to be operating illegal gambling operations, according to a press release from Schuette’s office.

The letters are the result of an ongoing investigation by the Michigan State Police, the Michigan Gaming Control Board and the Attorney General’s office. Last month, Schuette’s office announced it had already closed eight such operations after coming to an agreement with a gaming software supplier.

"We will continue to work with the Michigan State Police and the Michigan Gaming Control Board to shut down any illegal gambling operations we find," said Schuette. "Citizens should steer clear of Internet Sweepstakes Cafes that are nothing more than unregistered, illegal casinos."

Locally, cease and desist letters informing the owners that they are suspected of violating State Gaming Laws were sent on June 8 to West Point, 1493 S. Linden near Corunna, and a second location in Burton called East Point Business Center & Internet Café at 3097 Genesee Road.

Several letters addressed to various people regarding the West Point operation included Video Gaming Technologies of Brentwood, TN;, and agents for West Point Plaza where the business is located.

The letter states that Schuette’s office has confirmed that West Point “constitutes and illegal gambling house, and thus, a public nuisance. This conclusion arises from the business’s ongoing practice of receiving money from customers in exchange for Internet access and chances to win prizes by playing computer-based casino style games.”

The letters warned of possible legal action if the owners/operators refused to halt ongoing gambling operations that violate state gaming laws. Should any of the nine locations refuse to halt operations, Schuette will take immediate action to shut them down through the criminal or civil court system.

Owners or operators of West Point did not respond to a telephone call from The View seeking comment.

Investigations are still pending against the owners and operators of these businesses that may result in additional criminal or civil charges., according to Shuette’s press release. Michigan State Police, Gaming Control Board, and Attorney General’s office will continue to investigate and close other unlawful internet sweepstakes throughout the state.

Internet sweepstakes cafés are operations housed in retail buildings that contain banks of computers with Internet access. Some serve light fare, like pop and chips, to patrons. Each purchase entitles the customer to a certain number of sweepstakes entries. The customer is then given the opportunity to "reveal" whether the sweepstakes entries are winners by using a computer monitor that activates a spinning wheel similar to that of a casino-style video slot machine. Schuette asserts that this type of gaming violates the Michigan Gaming Control and Revenue Act.

Last month, the Attorney General’s office also issued a series of cease and desist letters that led to an agreement with Innovative Entertainment to voluntarily close eight locations in Michigan. Innovative Entertainment of Michigan had licensed and supplied the casino-style gaming software and agreed to remotely shut down locations In Grand Rapids, Jackson, Portage, Holt, Saginaw, Lansing and the Flint Business Center, at 4835 Fenton Road in Flint.

An additional venue, Players Club Internet Cafe in Westland has since voluntarily closed, avoiding the most recent enforcement action by the Attorney General’s Office.

Michigan citizens are encouraged to report any suspicious or illegal gambling to the Michigan Gaming Control Board by calling their 24-hour anonymous tip line at, 888-314-2682.