Atypical eagle scout project to have long impact on district 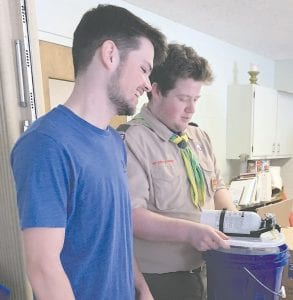 At left, Jacob Sanborn another Eagle Scout of Troop 106, works with Mason Coon work on preparing the buckets. Photo provided

Something else Coon is interested in is ALICE training, which teaches law enforcement and school staff how to respond in the event of a shooter on campus. ALICE stand for Alert, Lockdown, Inform, Counter, and Evacuate; and describes the general order of actions should such an event occur.

Coon said one of his teachers mentioned it might be helpful to have certain kinds of supplies on hand in the event of such an incident; which gave him the idea for what he calls “Go Buckets”, five-gallon buckets with supplies to be handy in each classroom for those cases.

Perhaps serendipitously, the Boy Scout motto is “Be Prepared” and the Eagle Scout medal actually contains those very words. Coon spent multiple hours researching the idea, coming up with a final list of what he felt were the best items to go into the emergency kit. Attached to the lid of each bucket is a small fire extinguisher which, like other items, can do double duty; in the case of the extinguisher, as a weapon.

Right on top is a list of items and brief instructions on their use, in case panic is making it hard for the user to remember the purpose of each item. After that, of primary importance is the 140-piece First Aid kit, including a feminine care item—tampons— which Coon was advised can be used to help stop bleeding from bullet wounds—perhaps stabilizing a patient until medical staff can get to them.

As part of his research he met with the entire Swartz Creek American Legion— regular members, the ‘Sons Of’ group and the Auxiliary (spouses), some of whom were former police officers as well as combat hardened veterans. Coon said their assistance was tremendous in getting the project accomplished.

Also in the buckets is saran wrap and duct tape, both of which can be used to compress wounds or act as tourniquets, as well as a shower curtain which can be hung over the door window to avoid a shooter looking in or to provide privacy for the use of the bucket as a toilet (bath tissue included also).

Other multi-use items include body wipes, hand sanitizer, and kitty litter. Additional items are bottled water, a bio-hazard bag, whistle and glow sticks. The total project cost, for 28 buckets to go in Myers Elementary, was $1,094, $400 of which was from the American Legion Post 294 (Swartz Creek) and from the school district.

Superintendent Clarence Garner added the school already had a plan in place to eventually provide similar buckets for all district classrooms with monies secured by their local SRO’s (School Resource Officers), Parent Teacher Organization’s and budgeted funds for safety and security.

Coon said he was especially helped by his grandfather who flew up to the area just to help him and Troop 106 with the project. He has a $20,000 scholarship to Kettering University where he has always wanted to go and plans to pursue his goals in engineering. He added the project helped build his self-confidence in public speaking as he presented the bucket idea to multiple parties.