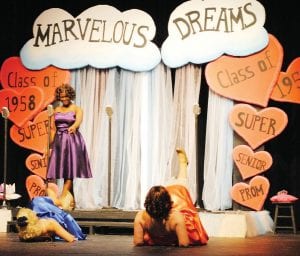 Aris Campbell (as “Betty Jean” in the purple dress) looks on while Michaela Nogaj (as “Suzy” in the blue dress) and Paige Conway (as “Missy” in the orange dress) get creative during rehearsals of The Marvelous Wonderettes.

FLINT TWP. — Audiences will be treated to a nostalgic trip back in time when The Marvelous Wonderettes hits the stage of the Carman- Ainsworth High School Auditorium 7 p.m. Jan. 13-15 and 2 p.m. Jan. 16.

Presented by the Carman- Ainsworth High School Theatre, The Marvelous Wonderettes was written and created by Roger Bean.

“The girls fell in love with the music and script, and brought it to me and asked me if they could do this,” said DeLynne Miller, director of theater at Carman-Ainsworth, and also the director/producer for the show. “They told me they would have it all choreographed before school started. The script was just released for amateur production this fall.”

Act One opens in 1958 at the Springfield High School prom where the audience meets the Wonderettes — Betty Jean Reynolds (played by senior Aris Campbell), Cindy Lou Huffington (played by senior Rolecia Looney), Missy Miller (played by senior Paige Conway) and Suzy Simpson (played by sophomore Michaela Nogaj). The four girls “with hopes and dreams as big as their crinoline skirts and voices to match” soon divulge information about their lives and loves, along with treating the audiences to artfully arranged renditions of classic 50s songs, such as “Dream Lover,” “Sincerely,” “Goodnight Sweetheart, Goodnight” and “Hold Me, Thrill Me, Kiss Me.” 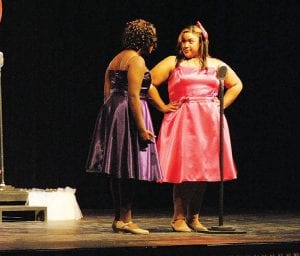 Rolecia Looney (pink dress) and Aris Campbell (purple dress) act out a part of the production in Act One of The Marvelous Wonderettes.

Following an intermission, Act Two fast-forwards audiences to the girls’ 10-year high school reunion in 1968. As they did at their prom 10 years prior, the Wonderettes perform soulful renditions of classic 60s tunes, such as “It’s In His Kiss” and “Son of a Preacher Man.” The second act also shows how the friendships between Betty Jean, Cindy Lou, Missy and Suzy have changed and remained.

Orchestrations is by Michael Borth, and vocal arrangements are by Roger Bean and William Baker. The show was originally produced for the New York Stage by David Elzer, Roger Bean and Peter Schneider, and premiered at the Milwaukee Repertory Theater.

The Marvelous Wonderettes is presented through special arrangement with Steele Spring Productions.

Tickets are $8 for general admission, $6 for groups of 15 and more. Tickets are available at the door or online at Showtix4u.com.