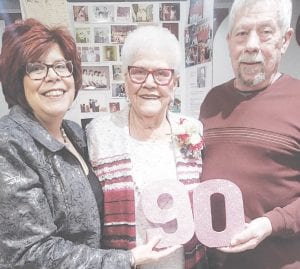 Sally Szigety, with daughter Sue Silverthorne and son Gary Pray, at her 90th birthday party Saturday at the VFW.

FLINT TWP. — Sally Szigety has been helping veterans and supporting veteran programs for more than 50 years.

On Saturday, March 7, more than 100 friends and family members gathered at the VFW/ AMVETS Post on Elms Road to wish Szigety a happy 90th birthday and show their appreciation for her years of service.

“I couldn’t get over the amount of people we had,” Szigety said. “And there were so many pictures taken. It was so wonderful. I just can’t get over it. It was such a beautiful party. I really enjoyed it.”

“Aunt Sally,” as she’s known at Mari-Dan Miller Farms, joined the VFW Auxiliary in 1968 through her son, Gary Pray, a Vietnam War veteran. She transferred her membership to the Swartz Creek VFW in 1973 when she and her husband, Louis, moved to Winchester Village.

Szigety became a life member of the Disabled American Veterans in 1975, and held the positions of secretary and treasurer.

In 2002, she joined the AMVETS Auxiliary in Swartz Creek. She has been elected to serve as the group’s president, vice president and chaplain, and currently is secretary. 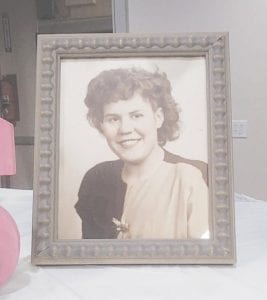 She also has belonged to the Military Order of the Cootie, the honor society of the VFW, serving as their president from 1984-85.

These days, she can be found taking orders and collecting money for VFW and AMVETS dinners most weeknights.

And her cakes, which she makes for funerals and potlucks and special events, are legendary.

In her spare time, Szigety likes to crochet, and she often gives away her handiwork.

“I’ve been active and I’m going to stay active,” said Szigety. “I can’t see just sitting and not helping when there are a lot of little jobs that can be done.

“I don’t think it hurts anybody to volunteer. We need people to go out and do the jobs that need to be done. I don’t see why other people don’t volunteer. It’s a shame. I enjoy doing it. I enjoy seeing all these people and meeting people.”

“We (she and her husband) always went up there to play Bingo and give the fellas gift cards to use in the commissary,” she said. “Those guys deserve a little attention. And I always enjoy doing it. We have a lot of nice veterans.”

Szigety said she knew about the birthday party in advance, but she was surprised to see how many guests attended, including loved ones who traveled from Wisconsin, Ohio and Chicago. Even her former cardiologist, retired Dr. Cyrus Farrehi, attended the festivities.

“He brought me through two heart attacks, and I think the world of that man, and we’ve stayed friends,” Szigety said.

The party was an open house, but Szigety said she was amazed by the number of guests who stayed for the duration. And although the invitations said “no gifts,” there were gifts, including one big yellow box containing a bunch of balloons and a six-pack of beer.

Szigety grew up in Flint, but Swartz Creek will always be her hometown, she said.