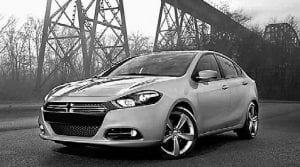 Last week, Dodge announced five trim levels, and pricing, for the 2013 Dart. The lowest trim level is the Dart SE, out the door at $15,995, above. The others are SXT, Rallye, Limited and R/T.

The 2013 Dodge Dart, say Chrysler officials, leverages the world-class architecture and DNA of Alfa Romeo and then infuses it with Dodge passion and design.

“With class-leading style, customization, safety, technology, and interior levels of roominess, the all-new Dart perfectly blends Alfa Romeo DNA and Dodge passion and style into one all-new car that customers will be proud to own and look forward to driving.”

The Dart will be available in five different trim levels in the United States. Customers can choose from the SE, SXT, Rallye, Limited and R/T.

The Dodge Dart SE, SXT, Rallye and Limited models are powered by the new 2.0- liter 16- valve Tigershark I-4 engine, which produces a best-in-class standard 160 horsepower (hp) and 148 lb.-ft. of torque, mated to a six-speed manual transmission, or available six-speed automatic. 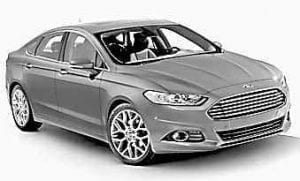 Ford says that some of its cars, including the Fusion, may use “retired paper money,” which is otherwise land-filled, in certain areas like trays and bins.

The Dodge Dart R/T is powered by the new 2.4-liter Tigershark MultiAir 2 4-cylinder that produces 184 horsepower and 171 lb.-ft. of torque and is mated to a six-speed manual transmission or available six-speed automatic with AutoStick.

Production of the 2013 Dodge Dart begins at Chrysler Group’s Belvidere (Ill.) Assembly Plant in the second quarter 2012 and will begin arriving in U.S. dealer showrooms in June 2012.

Retired Paper Money May be Used in Ford Interiors

Rising oil prices have Ford upping the ante in its push to reduce petroleum dependence and use more sustainable materials – including retired U.S. paper currency – to make parts.

A wide range of alternatives to products now made with petroleum are under review for potential application in Ford vehicles – from shredded retired currency to cellulose from trees, Indian grass, sugar cane, dandelions, corn and coconuts.

“Ford has a long history of developing green technologies because it’s the right thing to do from an environmental perspective,” said John Viera, Ford’s global director of Sustainability and Vehicle Environmental matters.

“The potential to reuse some of the country’s paper currency once it has been taken out of circulation is a great example of the kind of research we are doing,” Viera added.

In the early 2000s, when Ford started heavily researching sustainable materials, petroleum was readily available and relatively cheap; a barrel of oil was $16.65. Earlier this year, a barrel hit a high of $109.77.

Adding to the appeal of the new potential resources is that they are so plentiful. For example, 8,000 to 10,000 pounds of retired paper currency are shredded daily – more than 3.6 million pounds annually. The shredded money is either compressed into bricks and landfilled, or burned.

New sustainable materials that can meet Ford’s stringent requirements and testing could join a growing list of alternatives to petroleum-based materials already in use.

Ford’s use of soybean-based cushions in all of its North American vehicles including the all-new Fusion, for example, saves approximately 5 million pounds of petroleum annually. The all-new Escape has door bolsters partially made of kenaf – a tropical plant in the cotton family – offsetting the use of 300,000 pounds of oil-based resin per year in North America.

“We recognize the use of sustainable materials inside our cars, utilities and trucks can also help reduce our environmental impact. These are steps that are not only better for our planet in the long run but are cost-effective as well.”

Ford has concentrated on increasing the use of non-metal recycled and bio-based materials to reduce its dependence on petroleum products.

• Kenaf is used in the door bolsters of Escape

• Ten pounds of scrap cotton from blue jeans, T-shirts, sweaters and other items go in to the Escape’s dashboard

• Flex has wheat straw in its plastic bins

“We have been working with an everincreasing list of collaborators – chemical companies, universities, suppliers and others – to maximize efforts and develop as many robust, sustainable materials as possible for the 300 pounds of plastic on an average vehicle,” said Dr. Debbie Mielewski, technical leader of Ford’s Materials Research and Innovation team.

That leaves sustainable materials like shredded money being tested to determine how well they perform under certain conditions. Researchers can then recommend potential use. Shredded money, for example, is being considered for interior trays and bins, said Mielewski.