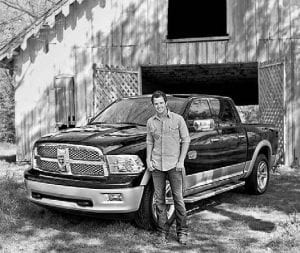 Fans can win tickets to the concert as well as collectible posters and vinyl records created for each artist. The vinyl record for Mercury Nashville recording artist Easton Corbin, the third Ram Jam artist, is his new single, “Lovin’ You is Fun.”

The remaining Road to the Ram Jam artists will be announced later and all five participating will receive a lease on a 2012 Ram 1500 Laramie Longhorn truck. The trucks will then be auctioned off in early 2013 with all proceeds going to benefit a charity of each artist’s choice.

Proceeds from Corbin’s Ram truck will be donated to the Freedom Alliance Scholarship Fund. The scholarship fund honors the bravery and dedication exhibited by Americans in our Armed Forces who have sacrificed life or limb by awarding college scholarships to their children. For the 2011 academic year, the fund awarded more than $1 million in scholarships to 240 sons and daughters of American heroes. To date, the fund has awarded more than $5 million in scholarships. For more information on the Freedom Alliance Scholarship Fund, go to www.freedomalliance.org. 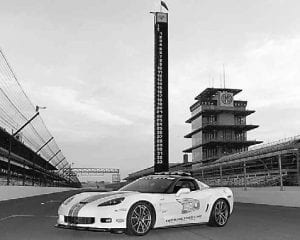 “I feel so fortunate to be a part of the Road to the Ram Jam series involving three things I am passionate about: trucks, honoring our military and country music,” Corbin said.

“Growing up on a farm, I learned to love trucks. Driving my new, loaded Laramie Longhorn is great and to be able to auction it off and donate the proceeds to the Freedom Alliance Scholarship Fund is an added bonus. I am looking forward to this program and being a part of the Ram Jam Concert in Nashville in December.”

Corbin is known for his traditional country sound, authentic lyrics and mastery of understatement. He was the first country male artist in 17 years to have his first two consecutive singles reach No. 1 – “A Little More Country Than That” and “Roll With It.”

A 2013 Chevrolet Corvette ZR1 will lead the starting field of the 96th Indianapolis 500 to the green flag Sunday, May 27 at the Indianapolis Motor Speed- way.

With 638 horsepower, the Corvette ZR1 is the most powerful production car ever to pace the race.

This will be the 23rd time a Chevrolet has paced “The Greatest Spectacle in Racing” and the 11th time a Corvette is serving as the Pace Car. Both are event records. The 2013 model year will mark the 60th anniversary and the final year of production for the current generation Corvette.

“Corvette embodies pure performance, so the ZR1 is a perfect car to pace the most prestigious auto race in the world,” said Jeff Belskus, Indianapolis Motor Speedway Corporation president and chief executive officer.

“Chevrolet is a great partner of the Speedway, and we share in the excitement of the upcoming 60th anniversary of the iconic Corvette brand. It’s even more meaningful to see a Chevrolet pacing the field at Indy since Chevy has returned as an engine supplier for the IZOD IndyCar Series for the first time since 2005.”

I can’t think of a better way to mark the 60th Anniversary of Corvette than having it lead the starting field of the Indianapolis 500,” said Jim Campbell, GM vice president of Performance Vehicles and Motorsports.

A supercharged, 6.2-liter LS9 engine generating 638 horsepower helps to create the ZR1’s performance. Of all mass-production companies, Chevrolet is the leader in using carbon fiber.

The lightweight material is used for structural components,including the front fenders, hood, roof, front splitter, rocker panels and floor pans. With a curb weight of 3,353 pounds, the ZR1 features a power-to-weight ratio of just 5.2 pounds per horsepower.