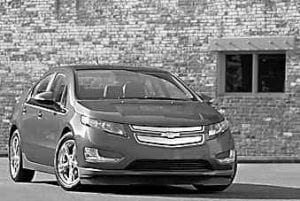 Chevrolet Volt owners collectively have saved a super-tanker of gasoline since the electric car with extended range went on sale, compiling 40 million miles on electricity and avoiding the use of more than 2.1 million gallons of gasoline.

“With each click of the odometer, Chevrolet Volt owners are measuring their contribution to reducing America’s dependence on foreign oil and to preserving the environment,” said Cristi Landy, Chevrolet Volt marketing director.

“Volt owners are also saving at the fuel pump with more than $8 million in combined savings.”

Chevrolet recently introduced a rolling ticker on its website that showcases real- time daily driving statistics for Volt owners based on OnStar data. 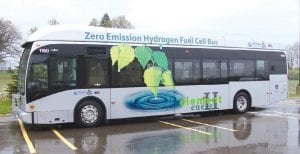 The MTA is the first transportation agency in the Midwest with a hydrogen fuel cell vehicle.

As of today, 40 million total electric miles (EV) have been driven, which is equivalent to:

• One supertanker of gas saved (2 million gallons of gas) “Our Volt owners are driving the vehicle exactly as the car was designed,” Landy said. “Sixty percent of the time our owners are driving electric, but the extended range is providing additional miles when they need it. This shows that you don’t have to change your daily driving habits to drive the Volt.” The Volt has a total driving range of up to 379 miles, based on EPA estimates. For the first 35 miles, the Volt can drive gas and tailpipeemissions free using a full charge of electricity stored in its 16-kWh lithiumion battery.

When the Volt’s battery runs low, a gas-powered engine/generator seamlessly operates to extend the driving range another 344 miles on a full tank.

Typically, Volt owners drive an average of 900 miles between fill-ups at the gas station.

Since the Chevy Volt went on the market in December 2010, Volt owners have saved 2.1 million gallons of gasoline by running on battery only – saving the equivalent of the delivery of the volume of a typical oil supertanker.

“Hydrogen as an alternative fuel for the public transit industry is environmentally friendly, reduces the carbon footprint and is technically feasible for a sustainable future,” said Ed Benning, MTA General Manager.

A fuel cell running on pure hydrogen, like the UTC Power Motion system utilized in the MTA bus, emits zero emissions at the source. In fact, the only thing that comes out of the tailpipe is water.

Fuel cells do not “burn” the fuel they use. Instead, they combine hydrogen with oxygen from the air electrochemically to produce electricity and emit only water vapor.

MTA’s new fuel cell bus is hybridelectric, zero emission and powered by a 120 kW UtC Power PureMotion fuel cell system. When compared to a diesel version, every bus equipped with a PureMotion system reduces nitrogen oxide emissions equivalent to removing 77 cars from the road per year and achieves the same carbon dioxide reductions as planting 31 acres of forest land.

The MTA will be procuring additional hydrogen vehicles in the near future. The Grand Blanc service garage will be expanded to provide storage for hydrogen and CNG vehicle and will offer maintenance.