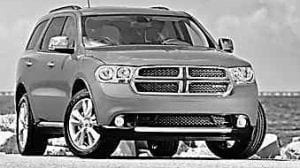 Edmunds.com and Parents magazine have selected the 2012 Dodge Durango among the “Best Family Cars of 2012.”

MAGAZINE, WEBSITE SAY DURANGO IS AMONG THE ‘BEST FAMILY CARS’

The Dodge Durango regularly gets overshadowed by its sister car, the Jeep Grand Cherokee, but the Durango seems to be coming into its own all the same, in a manner of speaking. That’s because, most recently, Edmunds.com and Parents magazine have selected the 2012 Dodge Durango among the “Best Family Cars of 2012.” This marks the 10th industry award for the 2012 Dodge Durango, including “Top Safety Pick” by the Insurance Institute for Highway Safety (IIHS) and “Full-size SUV of Texas” by the Texas Auto Writers Association (TAWA). “We are honored that Edmunds.com and Parents have featured the Dodge Durango on this exclusive list,” said Reid Bigland, president and CEO – Dodge Brand. “Dodge is committed to providing quality products to our customers that are safe, innovative and family-friendly, while doing so with passionate styling that sets us apart.”

For the fifth consecutive year, experts from both Parents and Edmunds.com scrutinized hundreds of vehicles focusing on safety and reliability as top priorities when deciding which cars would earn a spot on the “Best Family Cars” list. Each vehicle was also judged on performance, interior, exterior and family-friendly features. Organizers also consulted parents who own and drive these vehicles every day. “Modern and functional, the 2012 Dodge Durango has been designed with style and family style versatility in mind,” said Scott Oldham, Edmunds.com editor-in-chief. “The seven-passenger Durango packs a highquality interior, the latest high-tech gadgets, a fuel-efficient drive- train and a fun-to-drive demeanor.” The “Best Family Cars of 2012” feature appears in the July issue of Parents on newsstands June 12.

Thousands of fans voted for a satin black luxury Mustang concept in the first-ever SEMA Mustang Build Powered by Women. The project, a collaboration between Ford Motor Co. and the Specialty Equipment Market Association (SEMA), invited the public to view three concepts online and vote for the one they would like to see built by a group of female volunteers. The winning concept known as “High Gear” was designed by Jennifer Seely of Ford Motor Co. Inspired by international products in categories such as jewelry, couture clothing and architecture, the concept car is meant to stimulate the senses by fusing luxury and power. The car’s highlights include Rosegold chrome accents throughout the exterior and interior, satin black body, plush quilted suede seats and a leather-wrapped interior. Modifications will be made to the engine, undercarriage, drive train and sound system. “We appreciate our readers and fans helping us determine which concept will be used for this very exciting project,” said Doug Evans, executive

vice president of Source Interlink Media (SIM). SIM, a partner in the project, hosted the voting on several of its websites and will also host the physical build at its El Segundo, Calif., headquarters. “The concept selected by everyone who voted is amazing,” continued Evans. “It will be very exciting to see the vehicle transformed in just eight short weeks by the dedicated group of women participating in the project. As title sponsor of the project, Ford donated a 2013 Ford Mustang GT for the project. Female members of the SBN will perform the hands-on modifications from July to August. The finished vehicle will debut at the 2012 SEMA Show in Las Vegas, then will be auctioned off on eBay to raise money for the SEMA Memorial Scholarship Fund. The fund is dedicated to fostering the next generation of automotive aftermarket leaders and innovators. Content provided courtesy of Detroit Auto Scene. For more automotive news visit detroitautoscene.com.