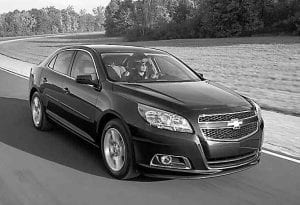 The 2013 Chevrolet Malibu Eco is the first and only all-new 2013 midsize car to receive double honors for safety, Chevy officials say, including a 5-Star Overall Vehicle Score from the National Highway Traffic Safety Administration and a 2012 Top Safety Pick by the Insurance Institute for Highway Safety. Both are the highest ratings possible. The IIHS tests vehicles to determine how well they protect occupants in front and side crash tests, in rollovers via a roof strength test, and simulated rear impacts to evaluate seat and head restraints for protection against neck injuries. The Malibu Eco achieved a “good” score in all four types of tests performed and has standard electronic stability control, which the IIHS requires for Top Safety Pick designation.

In achieving the 5-Star Overall Vehicle Score, the Malibu Eco was tested under NHTSA’s revised New Car Assessment Program. The overall score is based on frontal and side crash tests in addition to evaluation for rollover resistance. Under the rating system, performances in three test segments are combined mathematically into an “Overall Vehicle Score.” 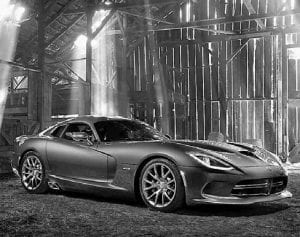 This year marks the 20th anniversary of the Viper. Pictured is the 2013 Viper GTS.

“We are now seeing the results from our commitment to design the highest-rated vehicles in the world in safety performance,” said Gay Kent, GM executive director of Vehicle Safety.

The all-new Malibu is designed and engineered to help drivers avoid crashes, while protecting occupants if a crash occurs.

The Malibu Eco is the sixth Chevy model within the 2012 model year to achieve a 5- Star Overall Vehicle Score for safety. The others include the Camaro Coupe, Sonic, Cruze, Volt and Traverse. The 2012 Malibu is also is a Top Safety Pick.

The Malibu Eco with fuel-saving eAssist technology is Chevrolet’s most fuel-efficient midsize car ever. It is on sale now in the United States with a base price including destination of $25,995.

Chevrolet is scheduled to roll out an all-new fuel-efficient 2.5L Ecotec engine on the full Malibu lineup this summer. A new turbo model will be available this fall.

There’s good news to report on several fronts regarding the 2013 SRT Viper (formerly the Dodge Viper).

First and foremost, Chrysler has recently installed the “Viper Cafe” at the Walter P. Chrysler Museum, replacing the older Walt’s Garage display. The new Viper Cafe gives fans of the “snake car” a new rallying point, so to speak, from which to keep the Viper going past its 20-year mark.

Viper debuted, as a Dodge concept, at the 1989 Detroit auto show and in just three years it was a 1992 model year production car.

This year marks the 20th anniversary of the Viper as a marquee.

Over time, Viper has migrated from Dodge cars to SRT (Street and Racing Technology) branding.

The 2013 Viper made its debut at the New York Auto Show in April and it was there that Ralph Gilles, president and CEO – Street and Racing Technology Brand and Motorsports, Chrysler Group LLC, reflected on the car’s ongoing rebirth, its long legacy and more.

“After a gut-wrenching period of uncertainty, the Street and Racing Technology brand team is extremely proud that our handbuilt in-Detroit, flagship supercar is back and ready to take on the performance car world,” said Gilles. “Beyond being the flagship for the new SRT brand, the launch of the 2013 Viper proves that we simply would not let the performance icon of the Chrysler Group die.” For the 2013 model year, two new models of the iconic supercar will be hand built at the Conner Avenue Assembly Plant in Detroit – the home for Viper since 1995.

Chrysler officials say both SRT Viper and SRT Viper GTS models offer new interior and exterior designs incorporating premium materials and new exterior surfaces with aerodynamically functional details that are beautifully integrated into the high-tech carbon fiber and aluminum skin. On the inside, they say, designers and engineers strived to rethink all touch points and upgrade all material appointments and technologies.

The SRT Viper GTS, Chrysler officials say, builds on the DNA of the SRT Viper model with more technologically advanced solutions, like two- mode active suspension, to allow the car to find new limits on the track, while also opening up its envelope as a more premium and mature evolution of the classic, extreme performance formula.

Designed and built with premium features and materials inside and out, Chrysler officials say the Viper GTS will compete with the best performance vehicles in the world with a wide range of comforts, advanced drivetrain and interior.

“Our returning customers will see the world-class levels of pride, quality and hand craftsmanship built into the 2013 Viper,” Gilles said.

“With two price classes of the SRT Viper and SRT Viper GTS, we have offerings for both the traditional core Viper customer and for the new customer who wants the same performance in a package with more technology and premium creature comforts.”