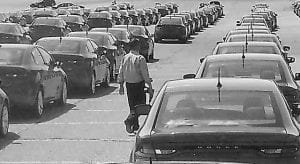 A dealer gets the jump on the Dart Driveaway at the Palace in Auburn Hills last Wednesday.

Nothing like an ocean of cars, same model/same color, to make the auto industry’s eyes pop in marketing glory.

So it was at the Palace of Auburn Hills last week, where Chrysler Group and its Dodge brand rented the west parking lot as part of a promotion to put the car keys to 250 bright red Dodge Darts in the hands of dealers who came to town from all over the country.

In all, nearly 300 dealers gathered at the Palace last Wednesday, one of those hot, muggy, but sun-shiny days here in Southeast Michigan, all to deliver the acclaimed 2013 Dodge Dart to dealerships across Michigan, Ohio, Indiana and Kentucky. 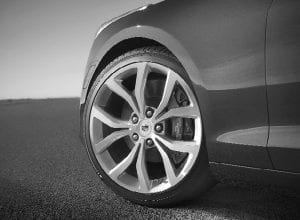 “There is tremendous excitement about the Dodge Dart,” said Richard Cox, director, Dodge Brand. “It takes so much momentum to get this kind of response – to pack the Palace with dealers – it is a testament to how special this vehicle truly is.”

Fresh from the Chrysler assembly plant in Illinois that builds them, Dodge assembled 250 Darts representing five trim levels and then gathered all of those cars in the west parking lot.

One dealer said it showed that Detroit was back in business again, following all of the economic turmoil and what- not from just four years ago now.

The Dodge Dart is Chrysler’s first such competitive compact-sized car following the demise of the aging and now-defunct Neon car brand over six years ago now. Dodge said that the Palace event was actually one of 12 such “Dealer Driveaway” programs taking place across the U.S. during June.

The Dart debuted at the Detroit auto show in January to largely positive critical acclaim and the Dodge dealer body has been clamoring for a compact-car replacement, all to better compete against the Chevrolet Cruze and the Ford Focus in the domestic marketplace.

The Dart also received acclaim at the Chicago auto show in February, in part, because many of the employees who build the Dart at the Chrysler Belvidere Plant made the trek to Chicago.

Truth be known, most auto plants in Southeast Michigan have either on-site, or nearby areas to marshal, count and ship their vehicles, so “an ocean of cars” represented by the Dodge dealer driveaway isn’t actually an uncommon sight here in the Motor City.

But still, for an automaker that almost went out of business in 2009, the sight of 250 bright red Dodge Darts all together in one place at one time, is perhaps a harbinger of good things to come for the Auburn Hills company.

The all-new 2013 Cadillac ATS compact luxury sport sedan will take race-ready technology tested on the world’s premier racetracks and proven on Cadillac CTS V-Series vehicles and bring it to the industry’s most popular luxury segment.

But it isn’t just enthusiasts who will benefit from components like Brembo brakes and segment-exclusive Magnetic Ride Control suspension. Each has its own practical, realworld benefits.

“When we talk about the ATS having quick, nimble, fun-to-drive dynamics, we’re talking about qualities that contribute to better safety and efficiency as well,” said Don Butler, vice president of Cadillac Marketing.

“And thanks to Cadillac’s advanced technologies, the ATS is a vehicle that’s as comfortable as it is quick. It’s a no-compromise luxury sport sedan.”

When equipped with Brembo brakes, GM says ATS’s estimated stopping distance from 60-0 mph of 129 feet is among the best in the class. On race tracks, that equates to less time spent in a slow corner; on public roads, shorter stopping distances can reduce the damage caused in a collision or prevent one altogether.

Magnetic Ride Control, a class-exclusive technology pioneered by Cadillac and adopted by automakers such as Ferrari brings ondemand suspension performance and comfort adjustments to any ATS equipped with the FE3 Sport Suspension package. With the push of a button, the car can transform from a sharp sports car to a comfortable luxury sedan, Cadillac officials say.

This duality is made possible, they say, by electronically controlled shocks filled with a magneto-rheological fluid containing minute iron particles. Under the presence of a magnetic charge, the iron particles align to provide damping resistance almost instantly. Sensor input determines the amount of resistance required, varying the magnetic charge to optimize damping.

Magnetic Ride Control also uses sensors and processors to constantly study the road surface and make small adjustments in just one millisecond to fine-tune the suspension beyond the driver-selectable presets of “Tour,” “Sport” and “Snow/Ice,” ensuring an optimal ride-and- handling balance for any condition, say GM officials.

The 2013 Cadillac ATS goes on sale this summer at a base price of $33,990, including destination charges. It will be built at Cadillac’s Lansing Grand River assembly plant, one of GM’s highest quality auto assembly plants.