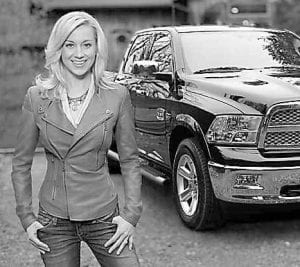 AUBURN HILLS – The Ram Truck brand is presenting “Road to the Ram Jam,” an all-star country music series featuring five of today’s best country artists leading to a 2012 Ram Jam concert event Dec. 29 in Nashville, Tenn., where all five artists will perform. Kellie Pickler is the first artist to help launch the series. “The first thing I learned to drive was my grandpa’s truck, so I’m definitely a truck girl,” Pickler said. “I’m excited that we will be auctioning off my Ram truck at the end of the year to benefit our veterans in need.” Fans can get more information and enter the sweepstakes at www.RamTrucks.com/RoadtoRamJ am.

AUBURN HILLS – Just 18 months following the start of production as the standard engine for the 2010 Jeep Grand Cherokee, the one millionth Pentastar V-6 engine was assembled recently at the Chrysler’s Trenton (Mich.) Engine Plant. “The Pentastar engine is a cornerstone of Chrysler’s effort to reinvent its business model with world class quality products. This awardwinning engine is proof that the company is transforming it products to meet the needs of our customers,” said Brian Harlow, Head of Powertrain Manufacturing. The 60-degree, V-6 engine, the most advanced six-cylinder ever produced by Chrysler, is now available in 11 vehicles across the Chrysler, Dodge and Jeep lineup and available in front-, rear-, and all-wheel-drive configurations.

ANN ARBOR – The average fuel economy of current model year vehicles is 14 percent higher than just four years ago, say researchers at the University of Michigan. For all 2012 light-duty vehicles (cars, pickup trucks, minivans, vans and SUVs) average mpg is 21.5, compared to 18.9 mpg for 2008 vehicles. The averages were 21.2 for 2011, 20.7 for 2010 and 19 for 2009. For new vehicles actually purchased, average fuel economy is typically one to two miles per gallon higher. “This implies that consumers tend to choose vehicle models with better fuel economy than the average of all vehicles available,” said Brandon Schoettle of the U-M Transportation Research