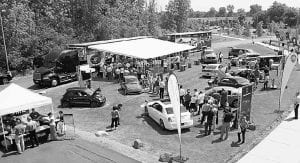 Bosch employees in Plymouth check out Chrysler’s mobile showroom, which will tour the Midwest.

Chrysler Group LLC hit the road last week with its 2012 mobile showroom to visit employee, affinity partner and supplier sites over the next 19 weeks.

This year’s version of the road tour is bigger and better, featuring 16 Chrysler, Jeep, Dodge, Ram Truck, SRT and FIAT brand vehicles, including the all-new 2013 Dodge Dart compact car, the Fiat 500 Abarth and the Chrysler 300 Luxury Series, the most luxurious and fuel-efficient Chrysler flagship sedan ever.

“This extensive, cross-country tour offers great opportunities to test drive our all-new Dodge Dart and models from all of our brands,” said Reid Bigland, President and CEO – Dodge Brand and Head of U.S. Sales. 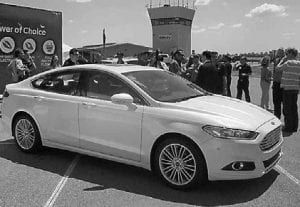 “We are bringing the showroom to you at your place of employment. Enjoy lunch, talk to our product and brand specialists, and most importantly, drive the models that make up our strongest product lineup ever.”

The 95-stop tour will continue through late October. This fun-filled, half-day event takes place at a company’s head- quarters where employees eat lunch, take a test drive, talk to product specialists, learn about vehicle discount information and get their photo taken with a Dodge Charger SRT8 Super Bee, which salutes the fun-loving past of Dodge muscle cars with its legendary 392 HEMI V-8.

Ford Rolls Out Its New Lineup On Test Track

Ford Motor Co. is now in the enviable position of seeing its engine displacements decreasing — all while its fuel economy is increasing. This came to light last week in Dearborn, where Ford hosted national media for it’s 2013 all-product ride and drive at the test track there.

There’s plenty of good news for Ford to report – by the end of this year, the automaker says, it will have eight vehicles that get over 40 mph highway, a number it says is more than what GM and Toyota are offering combined.

And that number is double of what Ford itself was offering as recently as 2011. Ford executives Mark Fields and Raj Nair addressed this and other trends. “Customers are starting to see the true benefits of our One Ford plan,” said Fields, who is Ford president of The Americas.

Ford plans for 10 to 25 percent of its global sales to be electrified vehicles (hybrids, plug-in hybrids and full electric vehicles) by 2020, and continues to find ways to make more affordable, high-volume, internal combustion engines even more fuel efficient.

Auto writers and reporters were given the opportunity to test-drive the 1.0L, 3- cylinder engine-driven Ford Focus, the version that’s already popular in Europe although it won’t be on sale in the U.S. until 2013.

One of the reasons for Ford pushing in downsizing engine displacements is weight – it was pointed out at the ride and drive that that same 1.0L engine weighs only 214 lbs.

Ford says it has invested record amounts in its powertrains and new vehicles since launching its Blueprint for Sustainability a few years back corresponding to the arrival of Alan Mulally as CEO and the famous One Ford Plan being put in gear soon thereafter.

Since 2007, the automaker has improved fuel economy in its vehicles in all key segments, including a notable 21- percent gain in its small car lineup’s fuel efficiency record between 2007 and 2012. Meanwhile, the fuel-efficient EcoBoost powertrains are now a mainstay in Ford’s product lineup. In fact, Ford’s annual EcoBoost engine production grows to nearly 1.6 million engines globally by 2013 — surpassing the company’s original target for that timeframe by more than 100,000 units.

“Whether you are talking about new technologies, engines or the vehicles themselves, customers increasingly are looking for good value,” said Raj Nair, group vice president, Global Product Development at Ford.

“Customers are telling us Ford is delivering what they truly want – including the newest vehicles to choose from in America.”