Chevy Volts entering Woodward after gathering at the Radisson Hotel in Bloomfield Hills.

So there they were – dozens of Chevrolet Volts, at least 50 in all, turning from the Radisson Hotel parking lot onto Woodward Ave. last week – and not a peep from them at all. Maybe until you’re around them in a group, one forgets just how quiet the Chevrolet Volt – GM’s plug-in, hybrid electric vehicle, really is. This all became notable because Chevrolet had treated 50 local Volt owners to an ice cream social at the Radisson last week, on the Tuesday evening prior to the Dream Cruise. The Volt ice cream social was the formal kickoff of four days worth of organized activities by Chevrolet, which is in the second year of a three-year overall sponsorship of the larger Woodward Dream Cruise. “The Woodward Dream Cruise is a true celebration of America’s love affair with the automobile and the open road, and for Chevrolet it is an opportunity for us to connect with some of our most passionate customers and their families,” said Chris Perry, Chevrolet global vice president of Marketing. Although the casual, informal parade of 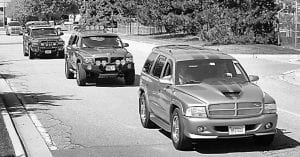 silent Volts down Woodward was perhaps a harbinger of things to come for the future of the auto industry, nostalgia nonetheless reigns supreme when it comes to the Dream Cruise and the social and pop cultural mythologies associated with it. On top of the north-to-south Volt casual cruise, Chevrolet used the Dream Cruise to help celebrate the 60th anniversary of the Corvette (c. 1955) and all of the auto folklore that goes along with the ’Vette – billed as America’s Sports Car. At 13 Mile and Woodward, Northwood Plaza in Royal Oak, the annual GM Design on Woodward gathering brought thousands of visitors there to ogle GM Design staffers’ personal cars during the day last Wednesday. Then, from Thursday through the Saturday of the Dream Cruise, Chevrolet Performance division had a big display that included a collection of performance show vehicles and production vehicles, a motorsports display, and a variety of Chevrolet performance parts also on static display for gearheads to enjoy.

From high-performance hot rods to cool classic vehicles, the Chrysler, Jeep, Dodge, Ram, Fiat, SRT and Mopar brands were present at the 18th annual Woodward Dream Cruise on Saturday, Aug. 18. New this year, the Dodge brand brought the annual celebration of classic cars to its fans as Steve Magnante, a SPEED TV and freelance automotive reporter, and brand representatives traveled Woodward in a 1970 Dodge Polara interviewing vintage and current Dodge vehicle owners at favorite hangouts along the route. The interviews were streamed live on the Dodge brandblog, www.redlinedodge.com. “The Woodward Dream Cruise is the perfect place to showcase the dynamic vehicles each of our brands has to offer as enthusiasts from all over the country come together to celebrate classic and current car culture,” said Reid Bigland, head of U.S. Sales and president and CEO-Dodge Brand, Chrysler Group LLC. “With some of the most recognized and revered vehicles

in the industry, this is a great way to connect with our passionate owners and enthusiasts, celebrating both our heritage and future technology.” Located at the corner of Woodward and 13 mile in Royal Oak, this year the Chrysler Group featured some 70 vehicles on display, including the 2013 Dodge Dart Rally Car with 600 horsepower, 2013 SRT Viper and more than a dozen classic Walter P. Chrysler Museum vehicles, as well as several Moparized cars and trucks. Visitors also got an up-close look at the Ram brand Raminator Monster Truck. In addition to vehicle eye candy, attendees received a demonstration of the Chrysler Group’s Uconnect technologies in the Uconnect trailer, viewed Mopar performance parts at the Mopar Image Center trailer and shopped for a variety of merchandise available from each brand.