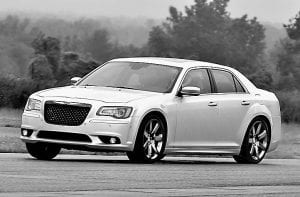 The Chrysler 300 V6 earned an 83 test score in Consumer Reports ratings, which puts it near the top of its class.

When Consumer Reports tested the V8-powered 300C last year, engineers found it to be a huge improvement over the original.

For 2012, the 300’s V6 engine was paired with an eight-speed automatic transmission, which improved drivability and helped the large sedan get a decent 22-mpg in CR’s fueleconomy tests.

Rounding out Consumer Reports’ top 5 are the Hyundai Genesis, the re- designed Hyundai Azera, the Buick LaCrosse equipped with GM’s eAssist mild-hybrid system, and the freshened Ford Taurus.

“The 2011 redesign of the 300 puts Chrysler’s flagship back on the map in the large sedan category,” said David Champion, Sr. Director of Consumer Reports Automotive Test Center.

“Though the muscular V8-powered 300C delivers more oomph, most buyers will probably be quite happy with the V6 engine, which contributes to its refined character and helps it score near the top of its category.”

Technologies like advanced turbodiesel V8 engines or hydroformed steel frames have advanced the 2013 GMC Sierra to unprecedented levels of capability for full-size pickups.

In just the decade since the 2003 model debuted, maximum towing capacity for a Sierra HD has risen 43 percent, from 16,100 pounds to an industry-leading 23,100 pounds.

Getting that towing force from the engine to each rear wheel is the task of a set of gears located in the center of the truck’s rear axle known as the differential.

The ratio of the sizes of those gears is represented by the diameter of the gear that drives the wheels in relation to the gear from the driveshaft. So, a 3.08:1 ratio indicates the drive gear has 3.08 times as many teeth as the gear on the driveshaft.

Each ratio is decided after months and years of testing factors such as acceleration from a stop; performance on a grade; transmission behavior; fuel economy; towing, and thermal management. Keeping engine speeds down allows a vehicle’s cooling to be more effective.

How much of a difference does the choice of axle make?

Martuch estimates the fuel economy difference at highway speeds would be around 0.2-0.3 mpg between those two ratios, though reduced engine noise is also a benefit of maintaining lower engine speeds with the more- efficient ratio.

“The higher the combined weight of a truck and trailer,” he said, “the harder the vehicle needs to work. If a customer is going to tow a small boat just a few times a year, a Sierra 1500 with a lower ratio would capably handle the occasional towing duty while delivering better efficiency the other 95 percent of the time.

“But for someone towing construction equipment every day, I would definitely recommend an HD pickup with a 4.10 axle and external engine and transmission oil coolers.”