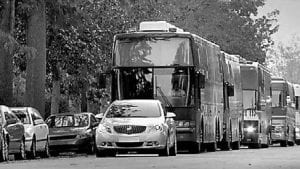 Buick Verano sales continue to grow quickly three months into its public life. On Sunday, March 11, the new luxury sedan got the “Celebrity Apprentice” treatment when it was the subject of teams competing to create a consumer launch event. During the show, Buick also debuted two new 30-second TV spots showcasing Verano’s advanced features. “Tour Bus” focuses on the IntelliLink infotainment system, while “Quiet World” highlights QuietTuning technology. Each is available for viewing online. The first commercial, “Tour Bus,” features indie rock band Neon Trees. A free song from the band is available for download through the Buick Facebook page. Verano sales in February were 1,688 units compared to 265 in December, its first full month on sale. At times, more than one in two buyers have come from outside General Motors to buy the car. USA Today recently called Verano “a compact with big car hush.” and “came away impressed on all counts.” In January, Verano topped an AutoTrader.com list of vehicles with the largest month-over-month increase in reader interest. “Already, Verano is building a strong fan base among media and consumers alike,” said Brian Sweeney, U.S. vice president of Buick and GMC Sales and Service. “Early sales momentum shows the desire for Buick’s luxury content and quality in a smaller vehicle.”

Ford’s EcoBoost engine has figuratively gone from zero to 60, allowing the Dearborn automaker to introduce the technology to the public via the popular F-150 model. Eric Kuehn, chief engineer for electrified programs and former chief engineer for Ford F- 150s, said that the EcoBoost allows Ford to move to the V- 6, 3.5 liter engine, replacing the 4.6 and 5.4 V-8 without compromising performance. Smaller displacement means less weight, which translates to better mileage, Kuehn said. Less mass also means the engine doesn’t have to work as much to move the vehicle. “When we did all the testing of the EcoBoost engine, our durability tests showed us they’d last,” Kuehn said. “Endurance is a key component when selling to truck buyers.” The EcoBoost engine had to produce in terms of torque, mileage, performance – also called grade acceleration, throttle response – also

known as pickup and passing performance. “We called it the AND solution,” Kuehn said. “The Eco- Boost needed to be a high performer AND have capability such as towing. It needed to have payload AND deliver fuel economy.” The EcoBoost, Kuehn said, works with direct injection, which meters and directly injects fuel into cylinder heads. It uses two turbos, which are integrated into exhaust gas waste energy, essentially turning the turbo, which then compresses air and which make more combustion. That then translates into better torque and mileage. Simply put, it uses exhaust gas to work in such a way that it resembles a windmill, recapturing energy that would otherwise just go out the tailpipe, Kuehn said. Added to this powertrain engineering is computer technology, unique to Ford, that Kuehn calls the EcoBoost’s hidden warrior. “Our electronic controls and software monitors the engine and reacts to measurements to produce peak performance,” Kuehn said. “As we continue to improve the technology, and use across a larger part of Ford’s line up, the costs will go down,” Kuehn said. “We sold 127,000 EcoBoosts in 2011. Thanks to the F-150, that figure shot up to 1.2 million in 2012. That’s a huge shift in just one year.”

Chevrolet Silverado and GMC Sierra 2500 HD extended cab pickup trucks. Fleet and retail consumers can place orders beginning this April. The vehicles include a compressed natural gas (CNG) capable Vortec 6.0L V8 engine that seamlessly transitions between CNG and gasoline fuel systems. Combined, the trucks offer a range of more than 650 miles. The Silverado and Sierra will be available in standard and long box, with either two- or fourwheel drive. “The bi-fuel Chevy Silverado and GMC Sierra provide customers with choices in advanced propulsion technology, and because CNG is a clean-burning, domestically produced fuel, it has wide appeal, “said Ed Peper, general manager, GM Fleet and Commercial Operations. GM is the only manufacturer to offer a singlesource option for its gaseous fuel vehicles. The bi-fuel trucks are built with a specially designed engine, the fuel system is installed by GM’s Tier One supplier and the completed vehicle is delivered directly to the customer. This process makes ordering the bi-fuel option as seamless and efficient as a standard vehicle. “The bi-fuel truck provides businesses with added re-fueling flexibility and eases consumer range concerns that typically come with CNG, all while reducing emissions and controlling costs,” said Joyce Mattman, director, GM Commercial Product and Specialty Vehicles.