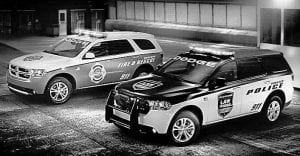 Following the successful debut of the Dodge Charger Pursuit, Dodge will begin offering a Durango Special Service model for fleet use. The Dodge Durango Special Service SUV is specially designed to handle the rigors of everyday use by police and fire departments and fleet customers. Chrysler Group fleet operations will start taking orders now, with deliveries expected to begin in the second quarter of 2012. 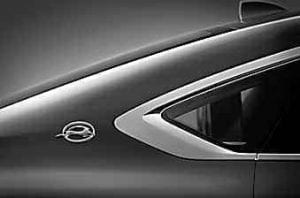 Partial exterior view of the 2014 Chevrolet Impala, a car that will fully debut at the upcoming New York Auto Show in April.

The Dodge Durango Special Service also has a customizable rear cargo area with under-floor storage compartments and additional storage in the side compartments.

The 2014 Impala full-size sedan will debut at the New York International Auto Show next month. Chevrolet also will showcase a more refined version of the family-friendly Traverse crossover utility vehicle for 2013.

“The momentum at Chevrolet continues to build with the debut of the 10th generation of the Impala, one of the brand’s most enduring and cherished nameplates,” said Chris Perry, vice president of Global Chevrolet Marketing.

The Impala nameplate was introduced in 1958 and has been one of Chevrolet’s best- selling passenger cars for decades.

With the introduction of the new Impala, Chevrolet has revamped nearly every passenger car in the lineup in the past 24 months. The new cars helped Chevrolet become the top-selling passenger car brand in the United States in 2011.

The 2013 Chevrolet Traverse is among the safest vehicles on the road today, previously earning top marks from leading third-party organizations and in government crash testing. For the 2013 model, the Traverse adds the industry’s first front center air bag. It is engineered to protect drivers and front passengers in far-side impact crashes.

The air bag deploys in milliseconds and inflates between the driver and front passenger, providing added protection for both front occupants.

“The new Traverse builds on the success of the current model, offering a wide variety of improvements to ride and handling, interior materials and exterior styling without compromising the functionality and capability families need to support their busy lives,” said Perry.

In addition to the new Impala and Traverse, other Chevrolet vehicles on display at New York include the new Malibu Eco, Spark mini car, Tru 140S and Code 130R concept vehicles and Corvette 427 Convertible with 60th Anniversary package.

The Michigan Dept. of Transportation (MDOT) is seeking comments by April 30 on a public involvement plan for revising the states long range transportation plan.

The public involvement plan describes various opportunities the public will have over the next six months to help shape the revisions; it is available to view online at the state of Michigans Web site or in printed form, by request.

Comments or requests for printed copies of the plan may be submitted to Bob Parsons, MDOT hearings officer, at parsonsb@michigan.gov.