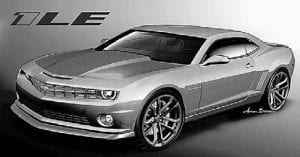 The 1LE package is distinguished by its matte-black hood, front splitter and rear spoiler. The 2013 Camaro 1LE offers a package that improves its road-racing performance. The 1LE model starts under $40,000.

The road-racing- inspired Camaro 1LE performance package returns for 2013 with unique gearing, suspension tuning, and tires that makes the model capable of more than 1 g of lateral acceleration and a sub-three-minute lap time at Virginia International Raceway’s Grand Course.

The package is offered on Camaro SS coupes with manual transmissions.

“That the 1LE breaks the three-minute lap at VIR puts it in the upper echelon of performance cars. That it starts under $40,000 makes the Camaro 1LE one of the most affordable, most capable track-day cars offered by any manufacturer.”

In anticipation of consumers entering the 1LE in amateur- racing events, Chevrolet is pursuing SCCA approval of the 1LE package for Touring Class competition. 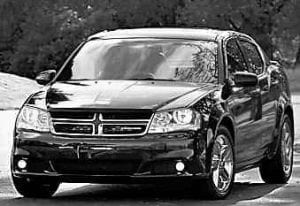 Dodge Avenger sales have in- creased 112 percent in 2012 calendar year through February – making it one of the fastest growing mid-size cars in America.

For 2013, all Camaro SS models including the 1LE will feature standard variable-effort electric power steering and an available dualmode exhaust system.

Both features were introduced on the ZL1. Additionally, 2013 Camaro LT, SS and ZL1 models are available with Chevrolet’s color touch radio with MyLink infotainment system. “With the 2013 model year, Camaro offers something for almost every driver, including: the 323-horsepower, 30-mpg 2LS; the all-new, 580- horsepower supercharged ZL1 convertible; the COPO Camaro for drag-racing; and the new 1LE for amateur track days,” said John Fitzpatrick, Camaro marketing manager.

Camaro sales were up nearly 20 percent for the first two months of the year, building on an 8.5 percent gain for all of 2011.

The 1LE package goes on sale this fall with the 2013 Camaro line. Pricing will be released later this year.

The Camaro 1LE package was introduced in 1988, inspired by Camaro’s involvement in Pro-Am road racing. For 2013, the 1LE package is offered only on 1SS and 2SS coupe models. Both feature a 6.2L LS3 V8, which is rated at 426 horse- power and 420 lb-ft of torque. In addition, 1LE is only available with a six-speed manual transmission.

“The Dodge Avenger is one of the fastest growing mid-size cars in America, with sales up 112 percent this year,” said Reid Bigland, president and CEO – Dodge Brand.

“We’re building off this momentum with the introduction of the new SE V6 package, delivering a true no-compromise solution for the mid-size car buyer – 283 best-in-class horsepower, 29 mpg highway, 18-inch wheels and a rear spoiler – all for just $21,495 MSRP. You get the power, the efficiency, the look and tremendous value that is un- matched in the segment.”

MIS Invites Fans to Drive Their Cars on the Track

Michigan International Speedway annually plays host to some of the best racecar drivers in the world, and now you can experience it for yourself.

Track Laps at MIS return in 2012 where fans will have the chance to drive on the twomile racetrack. The speedway team is also adding opportunities for guests to get behind the-scenes tours of the speedway with two tour options.

On four select Fridays in June and July, fans will have an opportunity to drive their personal cars on the track.

Reservations for Track Laps can be made by calling 800-354-1010 (no online purchases are available). Once a phone order has been placed, a ticket will be mailed to the guest in advance of their selected day.

All guests must enter and present their ticket at the tunnel entrance to the track off of Brooklyn Highway.

Track laps are $25 for each three-lap segment on the historic Michigan International Speedway. Participants will have the opportunity to drive on the track at a maximum speed of 70 mph led by the MIS Ford Mustang pace car.

“When I talk to fans on race weekend they all want to be like their favorite drivers and test their skills on the track,” President Roger Curtis said.

“The last two years we have had an unbelievable turnout for Track Laps and we expect nothing less in 2012. It is always fun to see people nervous when they first get on the track, but by the end of the three laps they cannot stop smiling.”

The Track Laps are limited to passenger vehicles only, no motorcycles. No passing of other vehicles will be allowed at any time. The driver of the vehicle must be 18 years of age and all participants will need to sign a waiver before driving on the track. Seatbelts and headlights must be on at all times.

Laps will take place rain or shine. In the case of a date cancellation due to extreme weather or safety conditions, MIS will contact all guests in advance of their visit. In addition, MIS is offering tours to all guests to get a behind-the-scenes view of the racing facility. The MIS VIP Tour ($40 per person) will last two hours and allows fans to exit the Tram to get up-close photos of all the areas. Upon arriving, fans will board a tram for one full lap around the oval before visiting the suites for food and drinks. Also included on the tour are visits to the Media Center, Tower Suites and the campgrounds.

The Discover MIS Tour ($5 per person) will last 30 minutes and will be guided by an MIS staff member. The tour takes fans on one trip around the oval before moving to the road course.