Ford Motor Co. used the hit FOX TV series “Alcatraz” to do a re- visit of the famous Mustang chase scene from San Francisco in the 1968 Steve McQueen movie “Bullitt.” The chase for the new TV show sequence was actually filmed on many of the same streets and corners traveled by the 1968 characters.

Scenes of police officers chasing down bad guys in fast cars have been a staple of film and television for decades. Some of the most iconic examples of the breed have involved the Ford Mustang including a 1968 pursuit through the hilly streets of San Francisco.

That, of course, was from the famous cop movie “Bullitt,” starring Steve Mc- Queen.

So for the two-hour season finale of the hit FOX TV series Alcatraz, executive producers J.J. Abrams, Bryan Burk, Jennifer Johnson, Daniel Pyne and Jack Bender have reimagined that legendary sequence. In the series, San Francisco detective Rebecca Madsen (series star Sarah Jones) tracks down inmates who mysteriously disappeared from the maximum-security prison when it closed nearly half a century ago and are now reappearing in contemporary San Francisco.

Like the original car chase, the new chase features a Ford Mustang and a Dodge Charger. But this time, with her own mint 1968 ’Stang unavailable, detective Madsen “borrows” a brand-new Deep Impact Blue 2013 Mustang GT to track down another of those reappearing convicts. The chase was filmed on many of the same streets and corners traveled by the 1968 characters. 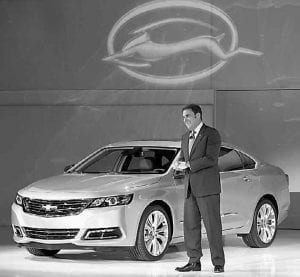 “It’s such an iconic chase and such an iconic moment in San Francisco history and cinematic history. It actually worked out in a magical way because this chase scene became central to the final pursuit in the final episode,” said executive producer Pyne.

“It was so exciting to work with Ford and the city of San Francisco to re-create the modern-day interpretation of such a legendary moment.”

The new 2013 Mustang delivers on style and substance, with a new exterior design, updated technology and new driver tools.

In addition, a new available 4.2-inch LCD screen features Track Apps, which enables the driver to monitor performance measures such as g-forces, shows acceleration times in quarter-mile and 0-60 increments, and displays braking times, complete with automatic and countdown starts. New Shaker audio systems provide a complete acoustic experience that simulates being at a live performance.

Chevrolet has completed the transformation of its North American passenger car lineup with the introduction of the all-new 2014 Impala.

The redesigned flagship sedan builds on the strong heritage of the Impala name- plate by offering expressive style, a more-refined interior, easy-to-use technology, and what is expected to be an exhilarating driving experience.

The all-new Impala goes on sale in early 2013 as the 10th generation of one of the industry’s most enduring – and popular – nameplates.

Impala was America’s best- selling full-size sedan in 2011,with sales of more than 171,000, which also made it one of the 10 best-selling cars overall in the United States, along with Chevrolet Malibu and Cruze.

“This all-new Impala delivers on our promise that every new car that wears the Chevrolet bowtie will embody the pioneering spirit that has defined the brand for more than a century,” said Chris Perry, vice president, global Chevrolet marketing.

Designed on an award-winning global platform, the 2014 Impala introduces new levels of comfort, refinement and technology.

• A range of three direct-injected engines, including a 3.6L V6, new 2.5L four-cylinder and a 2.4L four-cylinder with eAssist, that deliver enhanced performance and efficiency.

• Chevrolet MyLink, which includes Bluetooth audio streaming and available navigation among many other features, is controlled via a touch screen on the eight- inch display.

The 2014 Impala will be offered in

LS, LT and LTZ levels, and will be built at