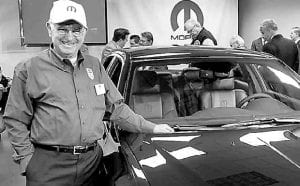 Mopar, it seems, has gone from just being aftermarket to a forethought in the auto industry. That’s because the after- market brand celebrated its 75th anniversary last week at its Mopar World Headquarters in Center Line in a big, big way.

Mopar, of course, has been a big brand name in both aftermarket parts and drag race and some sprint racecar heritage, which explained the presence of drag race legend “Big Daddy” Don Garlits at the proceedings.

But especially over the past few years, ever since the Fiat- Chrysler merger, Mopar has been building its brand around a series of hot customized cars, Jeeps and trucks to take the Mopar label further upstream.

“These head-turning ‘Moparized’ vehicles show how we can go to the next level of personalization. With our best-in-class offerings of parts and accessories, we give our customers every opportunity to further enhance the appearance and performance of their vehicles.”

The brand kicked off its yearlong 75th anniversary celebration with the introduction of the Chrysler 200 Super S by Mopar and the Dodge Charger Redline at the 2012 North American International Auto Show. Mopar, a simple contraction of the words Motor and PARts, was trademarked in 1937.