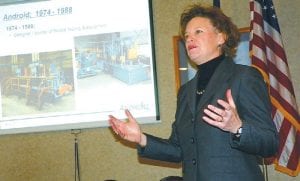 FLINT TWP. — A local company has a stake in a van built specifically for handicapped passengers that was recently displayed at the Detroit Auto Show.

Android Industries, 4444 W. Maple Road, does parts work for the MV-1- which is the first vehicle designed from scratch to be completely wheelchair-accessible. It is the only vehicle in which a person in a wheelchair can ride as a front-seat passenger, said June Nagle, Android’s business unit manager.

Guest speaking last week at the West Flint Business Association meeting, Nagle described Android’s role in helping to build the MV-1 and other services provided by the small but reviving Flint Township-based facility.

Determined to survive, the company looked around and repurposed itself as a coatings provider that has attracted new business including from GM, Ford, Toyota, Chrysler and Honda.

About a year ago, Android installed a $3 million Aquence coating line that does rust prevention. It consists of two 22,000 gallon tanks – the largest of its kind east of the Mississippi – that can treat 4,000 pounds of parts at a time in about an hour, Nagle said. Android has since added a powder coating system to paint those parts any color desired after they’ve gone through the Aquence process. One of Android’s first customers was the Vehicle Production Group – makers of the MV-1 aka First Mobility Vehicle. Florida-based VPG assembles the vehicles at a plant in Indiana but several of its parts first flow through processing at Flint-based Android Industries.

Billed as the only vehicle that meets or exceeds standards of the Americans with Disabilities Act, the MV-1 has a side wheelchair access ramp and room to secure up to four wheelchairs inside. Android does some assembly, welding and coating work for the vehicle and is anticipating that 7,000 to 10,000 MV-1s will be built this year, selling for approximately $38,000 each, which is much cheaper than converted vehicles, Nagle said.

“It has great potential,” she said. “It is a very feel-good project to be involved with.” But that’s not the only iron Android has in the fire.

Flint does Aquence coatings for solar photovoltaic tracker panels made by GreenVolts, a California-based manufacturer. Android-Flint has coated battery trays for electric buses used in Toronto, New York and Seattle and has done some “top secret, fun military stuff as well,” Nagle said. The Flint workforce is back up to 82 and growing as more new business is generated.

“The goal is to restore those two (Flint) plants to what they once were,” Nagle said.

Android operates globally with about 2100 employees mainly involved in building or assembling small modules. Six of its 17 plants are located in Michigan and employ 500 people. Android started in 1974 as a tool building company then branched into its current form in 1988, Nagle said.